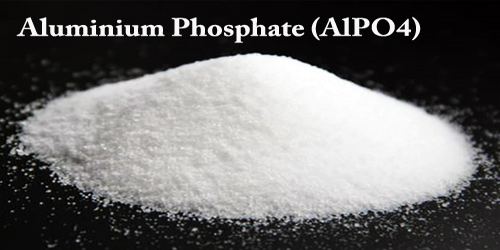 Aluminium Phosphate (AlPO4) is a chemical compound, and it is found in some minerals and used by the chemical as a catalyst and by the pharmaceutical industry to obtain chemotherapeutics drugs. Many synthetic varieties of aluminium phosphate are known. Commercial aluminium phosphate gel is accessible.

Aluminium phosphate occurs in nature as the mineral, berlinite. Also, it occurs in nature in minerals, amblygonite, (NaAl(PO4)(OH)); augelite, (Al2(PO4)(OH)3); lazulite, ((Mg,Fe)Al2(PO4)2(OH)2); variscite ((Al,Fe3+)(PO4)•2H2O); and wavellite, (Al3(OH)3•(PO4)2•5H2O). It is used as a flux for ceramics; as cement together with salt and sodium silicate; and within the manufacture of special glasses. It’s also utilized in dried gel and therapeutically as an antacid.

AlPO4 is isoelectronic with Si2O4, silicon dioxide. Berlinite looks like quartz and has a structure that is similar to quartz with silicon replaced by Al and P. The AlO4 and PO4 tetrahedra alternate. Like quartz, AlPO4 exhibits chirality and piezoelectric properties. Crystalline AlPO4 (berlinite) when heated, converts to tridymite and cristobalite forms, and this mirrors the behavior of silicon dioxide.

Aluminium phosphate (AlPO4) mostly exists in nature as the anhydrous salt AlPO4. The dihydrate and pentahydrate forms also exist in nature: AlPO4.2H2O and AlPO4.5H2O. The molecule is formed by the phosphate an anion PO43- and the aluminium cation Al3+. The anhydrous salt structure is very similar to other minerals as quartz, with a trigonal crystal system, however, the dihydrate form is similar to NaCl structure and 6 cations coordinated to 6 anions and viceversa. A synthetic hydrated form, AlPO4·1.5H2O is also known.

Aluminum phosphate adjuvant is meant to be used in parenteral vaccines and is usually considered safe. It should cause mild irritation, dryness, and dermatitis on skin contact. It’s going to also cause redness, conjunctivitis, and short-term mild irritation on eye contact. Ingestion of enormous amounts of aluminum phosphate adjuvant may cause respiratory irritation with nausea, vomiting, and constipation. Inhalation is unlikely, although the dried product may cause respiratory irritation and cough. Type I hypersensitivity reactions following parenteral administration have also been reported.