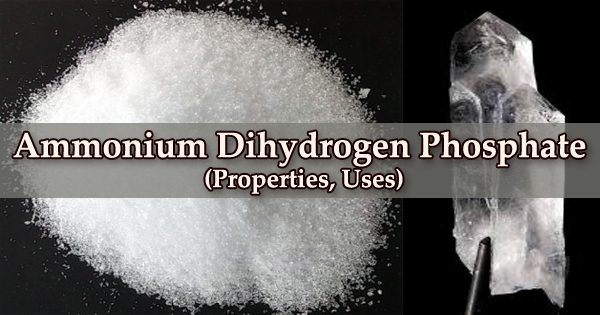 Ammonium dihydrogen phosphate (ADP), also known as monoammonium phosphate (MAP), is a clear, piezoelectric crystal that contains no water of crystallization. This material’s single crystals were first created for use in underwater sound projectors and hydrophones. It’s phosphoric acid’s ammonium salt (molar ratio 1:1). It comprises a dihydrogenphosphate and serves as a fertilizer. ADP is a chemical molecule whose formula is (NH4) (H2PO4). It’s used in agricultural fertilizers as well as various fire extinguishers. ADP also has significant uses in optics and electronics.

In terms of workability, brittleness, and solubility, ADP is comparable to common table salt. Blumenthal was one of the first researchers to use the electrooptic effect in ADP to demonstrate successful microwave light modulation. Monoammonium phosphate is soluble in water and crystallizes as elongated prisms or needles as the anhydrous salt in the tetragonal system. In ethanol, it is nearly insoluble.

The tetragonal crystal of ammonium dihydrogen phosphate is colorless and clear. soluble in water, alcohol, and acetone, but insoluble in acetone. When solid monoammonium phosphate decomposes into gaseous ammonia NH3 and molten phosphoric acid H3PO4 at temperatures up to 200 °C, it can be termed stable. Ammonia has a partial pressure of 0.05 mm Hg at 125 °C. When a solution of phosphoric acid is added to ammonia until the solution is unmistakably acid, ammonium dihydrogen phosphate or monoammonium phosphate is generated. Quadratic prisms form when it crystallizes.

Rickets, osteomalacia, primary or secondary hyperparathyroidism, chronic renal failure, and other disorders all have phosphate metabolism problems. The exothermic reaction of phosphoric acid and ammonia in the proper quantities produces monoammonium phosphate:

As sodium bicarbonate baking powder; in fermentations (yeast cultures, etc.); fireproofing of paper, wood, fiberboard, and other materials Monoammonium phosphate is most commonly used in agriculture as a component of fertilizers. It provides the elements nitrogen and phosphorus to the soil in a form that plants can use. The interaction between ammonia and phosphoric acid produces ammonium phosphate. It’s utilized in baked goods as a dough strengthener and leavening agent, as well as sauces and puddings as a firming agent and ph control agent. It’s also used as a yeast food and as baking powder with sodium bicarbonate.

Due to its birefringence qualities, monoammonium phosphate is a commonly utilized crystal in the field of optics. Because the partial pressure of ammonia over this acidic solution is relatively low, it is generated by a reaction of anhydrous ammonia and phosphoric acid in batch or continuous reactors and crystallized in ordinary crystallizers. The piezoelectricity of monoammonium phosphate crystals is required in some active sonar transducers (the alternative being transducers that use magnetostriction).

18-46-0 is the typical commodity grade of diammonium phosphate. Ammonium phosphates are mostly utilized as liquid fertilizers since they are pure and totally soluble. Because ADP crystals are easier to work with than quartz and, unlike Rochelle salt, are not deliquescent, they generally supplanted quartz and Rochelle salt crystals in transducers in the 1950s. The best course of action is to switch to a chemical product that has a lower risk of causing occupational harm, damage, or poisoning, as well as contamination of the environment.

Because it is relatively non-toxic, MAP is a popular chemical for recreational crystal growing, and it is offered in toy kits with a variety of pigments. The material’s impact on air quality, potential movement in soil or water, effects on animal and plant life, and compliance with environmental and public health requirements must all be considered in the final disposal of the chemical.