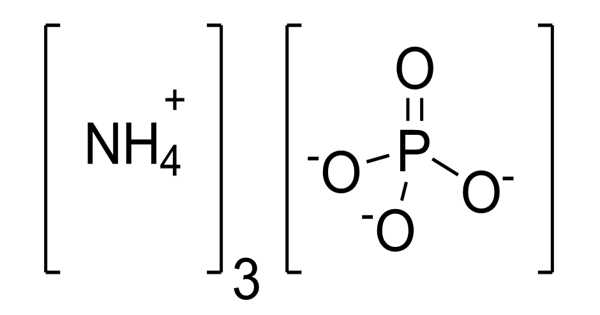 (NH4)3PO4 is a related “double salt.” (NH4)2HPO4 is also recognized, but its use is impractical. Ammonia is produced by both triammonium salts. It is obtained as a crystalline powder by combining concentrated ammonia and phosphoric acid solutions, or by adding an excess of ammonia to the acid phosphate (NH4)2 (HPO4). Unlike triammonium salts, which are unstable, diammonium phosphate (NH4)2HPO4 and monoammonium salt (NH4)H2PO4 are stable materials that are commonly used as fertilizers to provide plants with fixed nitrogen and phosphorus.

Triammonium phosphate can be prepared in the laboratory by treating 85% phosphoric acid with 30% ammonia solution:

(NH4)3PO4 is a colorless, crystalline solid. The solid, which has the odor of ammonia, is readily soluble in water. The salt converts to diammonium hydrogen phosphate (NH4)2HPO4.

As a high source of elemental nitrogen, ammonium phosphate is used as an ingredient in some fertilizers. It is also used in thermoplastic compositions as a flame retardant. It is found in intumescent paints and mastics, where it acts as an acid catalyst.

Furthermore, fertilizers containing ammonium phosphate frequently aid in the addition of nitrogen to the surrounding soil, thereby promoting growth and root development. Its solubility allows for rapid release into soils, which benefits newer plants and plants that need to be revitalized.