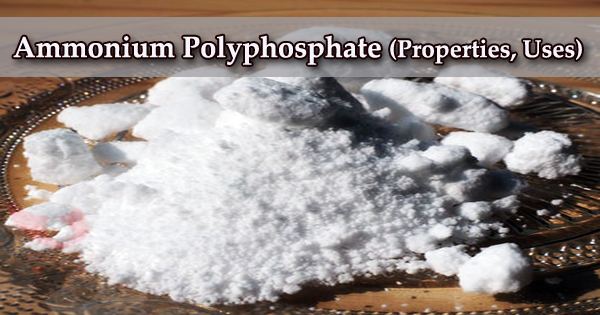 Ammonium polyphosphate (APP) is phosphorus and nitrogen-based inorganic flame retardant commonly used in polymers, coatings, wood products, and other fibrous materials. APP is a polyphosphoric acid and ammonia inorganic salt with both chains and perhaps branching. Its chemical formula is (NH4 PO3)n(OH)2, indicating that each monomer is made up of a phosphorus atom’s orthophosphate radical with three oxygens and one negative charge neutralized by an ammonium cation, leaving two bonds available for polymerization.

APP is a non-toxic, environmentally friendly, and halogen-free compound. It is most typically employed as a flame retardant, and the solubility, phosphorus content, chain length, and polymerization degree can all be utilized to establish the specific grade of ammonium polyphosphate. Diatomite is a non-metallic mineral with a vesicular structure, a high specific surface area, and strong adsorption properties. It is sometimes used as a papermaking filler due to its inexpensive cost and widespread availability. Some monomers in the branching situations lack the ammonium anion and instead bond to three additional monomers.

By heating a mixture of phosphoric acid and urea, ammonium polyphosphate (APP) was made, and APP/diatomite composite flame-retardant fillers were made using two methods: mixing and in situpolymerization. A substantial amount of APP was absorbed into the surface of the diatomite after mixing and in situpolymerization. There are two main families of ammonium polyphosphate, depending on the degree of polymerization: Crystal phase I APP (or APP I) and Crystal phase II APP (or APP II).

MPP (melamine pyrophosphate) has a stronger thermal stability and less water sensitivity than APP. Long-chain APP degrades at temperatures above 300°C, producing ammonia and polyphosphoric acid, but short-chain APP degrades at temperatures below 150°C. Concentrated phosphoric acid and ammonia can be used to make ammonium polyphosphate. At pH 5 to 7, iron and aluminum impurities, which are soluble in concentrated phosphoric acid, create gelatinous precipitates called “sludges” in ammonium polyphosphate.

Copper, chromium, magnesium, and zinc are examples of metal impurities that create granular precipitates. Ammonium polyphosphate, on the other hand, can operate as a chelating agent to maintain certain metal ions dissolved in solution, depending on the degree of polymerization. APP phase I has a short and linear chain (n 100), is more water sensitive (hydrolysis), and is less thermally stable it decomposes at temperatures over 150 °C. The APP Phase II family of ammonium polyphosphates has a high polymerization degree of n>1000, a cross-linked (branched) structure, and is a high-quality non-halogenated flame retardant.

Ammonium polyphosphate, phase II, has a better thermal stability (decomposition begins at around 300°C) and lower water solubility than APP I. Char can occur when APP is introduced to a polymeric substance that contains oxygen and/or nitrogen components. When heated to a high temperature, APP degrades to form ultraphosphate and polyphosphoric acid, which can catalyze the dehydration of polymers to give char residues. Ammonium polyphosphate is used as a fertilizer, food additive, and emulsifier (E number: E545).

In addition to paints and coatings, ammonium polyphosphate (APP) is utilized as a flame retardant in a range of polymers, the most important of which being polyolefins, particularly polypropylene, where APP is employed in intumescent systems. It is a halogen-free, environmentally friendly flame retardant. Many intumescent flame retardant systems, such as coatings, paints, and engineered plastics, contain it. It can be used alone or in combination with other ingredients in the flameproof treatment of fabrics, papers, fibers, and woods. It is used to make 20 percent Phosphorous/Nitrogen containing flame retardants.

To prepare 50 percent high concentration flameproof formulations necessary for particular applications, special treatment can be applied. It is sometimes used as a papermaking filler due to its inexpensive cost and widespread availability. As a result, it emerged that mixing diatomite and APP and employing a tiny amount of this product in the manufacturing of high-quality, flame-retardant paper may produce an efficient composite flame-retardant filler. Thermosets, where APP is employed in unsaturated polyesters and gel coatings (APP blends with synergists), epoxies, and polyurethane castings are further applications (intumescent systems). Flame retardant polyurethane foams are also treated with APP.

In non-self-charring polymeric materials, however, APP simply affects the polymer’s degradation pathway. When mixed with starch-based compounds like as pentaerythritol and melamine as expansion agents, APP can be used as an intumescent. In a series of papers, the processes of intumescence and the method of action of APP are described. When the molar ratio of phosphoric acid to urea was 1:1.8, the synthesized APP showed little water solubility. Granular polyphosphates appropriate for bulk blending are manufactured by reacting ammonia with ordinary wet process acid containing 52 percent P2O5 and driving out water with the heat of reaction to generate a phosphate melt of 10-43-0 containing about 40% phosphorus in the polyphosphate form.