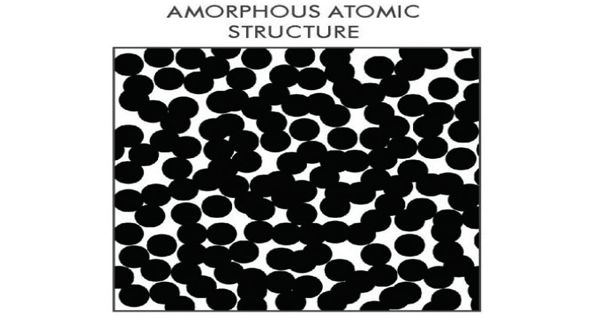 Amorphous metals are usually structurally and chemically homogeneous, which gives them isotropic properties attractive for many applications. It is also known as metallic glass or glassy metal, is a solid metallic material, usually an alloy, with disordered atomic-scale structure. These metals are made from alloys whose constituents may include Fe, Ni, and Co and a metalloid or glass former such as silicon, boron, or carbon. Most metals are crystalline in their solid state, which means they have a highly ordered arrangement of atoms. Amorphous Metal provides an alternative at the most basic level, with a random atomic microstructure.

Amorphous metals bring a new level of capabilities to material science and manufacturing. Crystalline alloys can often achieve a specific property like strength or hardness through post-processing.

Amorphous materials are formed by cooling the liquid material quickly enough to prevent crystallization; the atoms do not have time to arrange themselves into an ordered structure. Amorphous metals are non-crystalline and have a glass-like structure. It is a solid metallic material with a disordered atomic-scale structure. But unlike common glasses, such as window glass, which are typically electrical insulators, amorphous metals have good electrical conductivity and also display superconductivity at low temperatures. As amorphous metals cool, a lack of phase transformation maintains a liquid-like microstructure in the hardened metal.

Amorphous metals are very thin, of the order of 0.025–0.04 mm. There are several ways in which amorphous metals can be produced, including extremely rapid cooling, physical vapor deposition, solid-state reaction, ion irradiation, and mechanical alloying. They have the lowest coercivity of all the soft magnetic materials and higher resistivity than electrical steels, resulting in a material with the lowest core loss. The rapid cooling (in the order of millions of degrees Celsius a second) is too fast for crystals to form and the material is “locked” in a glassy state. Crystals form amidst the process of cooling heated metal. However, when heated metal is cooled quickly so as not to form crystals, it becomes amorphous and has a non-crystalline structure.

Amorphous metals are formed by the shock freezing of metallic melts. Currently, a number of alloys with critical cooling rates low enough to allow the formation of an amorphous structure in thick layers (over 1 millimeter) have been produced; these are known as bulk metallic glasses (BMG). Compared to magnetic steel sheets which are conventionally used as the iron core of motors, amorphous metals experience one-tenth of the core loss, and it is expected that they will contribute to energy conservation in electrical equipment. More recently, batches of amorphous steel with three times the strength of conventional steel alloys have been produced.