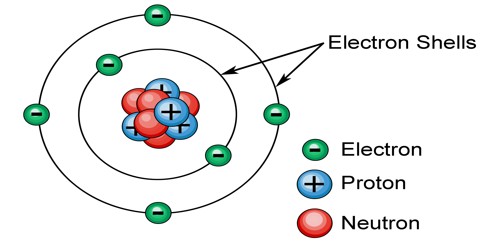 An electron shell is the outside part of an atom around the atomic nucleus. It is where the electrons are, and is a group of atomic orbitals with the same value of the principal quantum number n. The electrons in the outermost shell determine the chemical properties of the atom. They are labeled K, L, M, N, O, P, and Q; or 1, 2, 3, 4, 5, 6, and 7; going from innermost shell outwards.

Electron shells have one or more electron subshells or sublevels. These sublevels have two or more orbitals with the same angular momentum quantum number l. Electron shells make up the electron configuration of an atom. It is a group of atomic orbitals with the same value of the principal quantum number n. The number of electrons that can be in a shell is equal to display style 2n2. Each shell is composed of one or more subshells, which are themselves composed of atomic orbitals. For example, the first (K) shell has one subshell, called 1s; the second (L) shell has two subshells, called 2s and 2p. 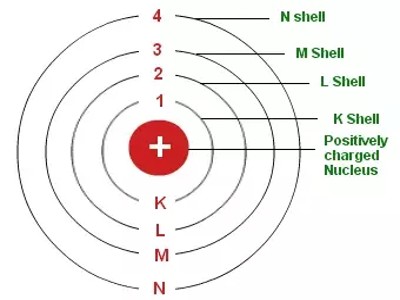 Electron shells have one or more electron subshells or sublevels. The name for electron shells comes from the Bohr model, in which groups of electrons were believed to go around the nucleus at certain distances so that their orbits formed “shells”. Neils Bohr gave the planetary model of an atom. He was the first person to suggest the periodicity in the properties of the elements. The electrons in the shell furthest away from the nucleus (called the valence shell) possess the greatest amount of energy.

Number of electrons in each shell –

Each subshell is constrained to hold 4ℓ + 2 electrons at most, namely: