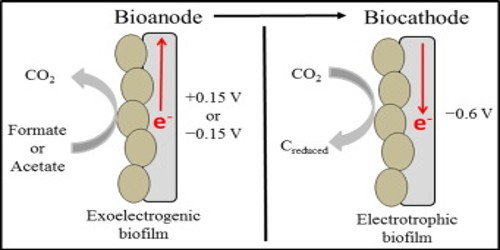 An electrotroph is a microorganism that can receive electrons necessary for its growth from an electrode (power supply) terminal. It is an Emerging Biocommodity Producer in a Biocatalyzed Bioelectrochemical System. It is the domain of those prokaryotes able to interact with charged electrodes, using them as electron donors and/or electron acceptors. The most transformative application of electrotrophy may be microbial electrosynthesis in which carbon dioxide and water are converted to multi‐carbon organic compounds that are released extracellularly.

The chemolithoautotrophic bacterium Acidithiobacillus ferrooxidans, that live in ocean thermal vents, has been shown to exhibit electrographic behavior in experiments. In particular, it switches the electron source for carbon assimilation from diffusible Fe2+ ions to an electrode under the condition that electrical current is the only source of energy and electrons. Electrotrophs are known to produce many valuable chemicals, such as methane, ethanol, and formic acid, and are best known to be used as biosensors to detect biological oxygen demand of water to ensure its purity level. The discovery of electrotrophs, microorganisms that can directly accept electrons from electrodes for the reduction of terminal electron acceptors, has spurred the investigation of a wide range of potential applications.