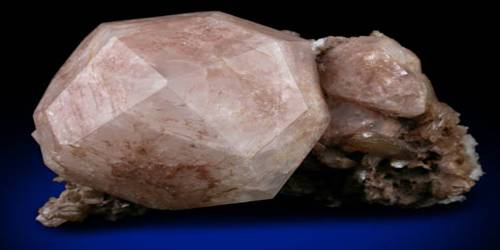 Analcime is a white, gray, or colorless tectosilicate mineral. It is a member of the zeolite group and often occurs together with other zeolites. It consists of hydrated sodium aluminum silicate in cubic crystalline form. Its chemical formula is NaAlSi2O6·H2O. Minor amounts of potassium and calcium substitute for sodium. A silver-bearing synthetic variety also exists (Ag-analcite). Analcime is usually classified as a zeolite mineral, but structurally and chemically it is more similar to the feldspathoids. Analcime occurs as a primary mineral in analcime basalt and other alkaline igneous rocks. It also occurs as cavity and vesicle fillings associated with prehnite, calcite, and zeolites.

Analcime’s structure, however, has a typical zeolite openness about it that allows large ions and molecules to reside and actually move around inside the overall framework. The structure contains large open channels that allow water and large ions to travel into and out of the crystal structure.

Well known locations for sourcing analcime include Croft Quarry in Leicestershire, UK; the Cyclopean Islands east off Sicily and near Trentino in northern Italy; Victoria in Australia; Kerguelen Island in the Indian Ocean; in the Lake Superior copper district of Michigan, Bergen Hill, New Jersey, Golden, Colorado, and at Searles Lake, California in the United States; and at Cape Blomidon, Nova Scotia and Mont Saint-Hilaire, Quebec in Canada; and in Iceland.