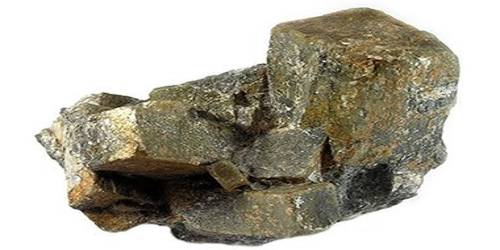 It is usually only visible when a crystal is cut. Andalusite is often replaced by other minerals, especially micas, Pyrophyllite and Kyanite, which can form a complete or partial pseudomorph after the Andalusite. At higher temperatures and pressures, andalusite may convert to sillimanite. Thus, as with its other polymorphs, andalusite is an aluminosilicate index mineral, providing clues to depth and pressures involved in producing the host rock. Andalusite is a common metamorphic mineral which forms under low pressure and low to high temperatures. The minerals kyanite and sillimanite are polymorphs of andalusite, each occurring under different temperature-pressure regimes and are therefore rarely found together in the same rock. Because of this, the three minerals are a useful tool to help identify the pressure-temperature paths of the host rock in which they are found. An example rock includes hornfels.