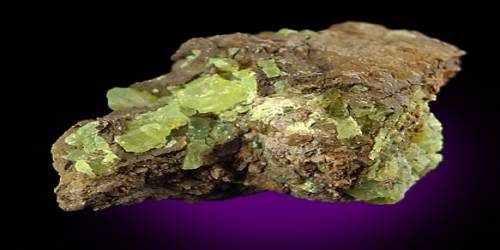 Andersonite, Na2Ca (UO2) (CO3)3·6H2O, or hydrated sodium calcium uranyl carbonate. It is a rare uranyl carbonate mineral, that was only described in the last half century and was first described in 1948. Named after Charles Alfred Anderson (1902–1990) of the United States Geological Survey, who first described the mineral species, it is found in sandstone-hosted uranium deposits. It has a high vitreous to the pearly luster and is fluorescent.

It was first described in 1948 for an occurrence in the Hillside Mine near Bagdad, Eureka District, Yavapai County, Arizona.

Andersonite’s lovely color and unique glow, as well as it’s rarity and fluorescence, make it a wonderful mineral for rare mineral collectors. Remember, this is a radioactive mineral and should be stored away from other minerals that are affected by radioactivity and human exposure should definitely be limited. Andersonite specimens will usually glow a bright lemon yellow (or green with blue hints depending on the deposit) in ultraviolet light. It is commonly found as translucent small rhombohedral crystals that have angles close to 90 degrees although its crystal system is nominally trigonal. Its Mohs hardness is 2.5, with an average specific gravity of 2.8.

It occurs in the oxidized zone of uranium-bearing polymetallic ore deposits. It also may occur as an efflorescent crust on the walls and timbers of uranium mines. As this mineral is water-soluble, samples must be stored in dry conditions. It occurs with schrockingerite, bayleyite, shwartzite, boltwoodite, liebigite, and gypsum.

Localities for Andersonite include in the United States, Austria, England, Sweden, the Czech Republic, and Argentina, among only a few others.