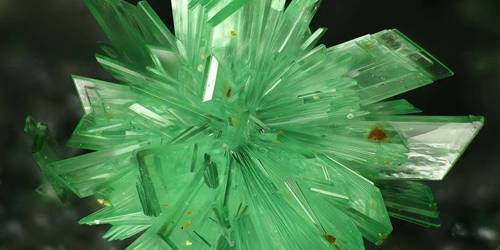 Annabergite is an arsenate mineral consisting of a hydrous nickel arsenate, Ni3(AsO4)2·8H2O, crystallizing in the monoclinic system and isomorphous with vivianite and erythrite. It is a rare nickel mineral that can often have a bright green color. It is the end member of a series with Erythrite, with Annabergite being the nickel-dominant member and Erythrite being the cobalt-dominant member.

It is a secondary mineral that forms from the alteration of cobalt-nickel bearing arsenides and sulfides in oxidized hydrothermal deposits in association with erythrite, retgersite, gersdorffite, nickeline, maucherite, and nickelskutterudite. Closely related is cabrerite wherein some of the nickel is replaced by magnesium. It is named for Sierra Cabrera in Spain where it was originally found. Crystals are minute and capillary and rarely met with, the mineral occurring usually as soft earthy masses and encrustations. A fine apple-green color is its characteristic feature. It was long known (since 1758) under the name nickel bloom; the name annabergite was proposed by H. J. Brooke and W H. Miller in 1852, from Annaberg in Saxony, one of the localities of the mineral.

It occurs with ores of nickel, of which it is a product of alteration. A variety, from Creetown in Kirkcudbrightshire, in which a portion of the nickel is replaced by calcium, has been called dudgeonite, after P. Dudgeon, who found it.

It was named for the type locality in the Annaberg district of Saxony, Germany. Annabergite is an uncommon mineral that can be found in localities in, additionally, Slovakia, Austria, Spain, England, Scotland, Greece, Morocco, Iran, Bolivia, Mexico, the United States, Canada, Australia, and Japan, among several others.