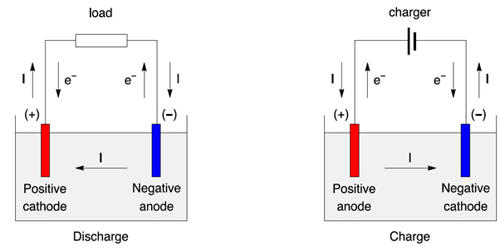 An anode is an electrode through which the conventional current enters into a polarized electrical device. In the most basic form, an anode in electrochemistry is the point where an oxidation reaction occurs. It is the positively charged electrode by which the electrons leave an electrical device. This contrasts with a cathode, an electrode through which conventional current leaves an electrical device. A common mnemonic is ACID, for “anode current into the device”. In a battery or other source of direct current, the anode is the negative terminal, but in a passive load, it is the positive terminal. The direction of conventional current (the flow of positive charges) in a circuit is opposite to the direction of electron flow, so (negatively charged) electrons flow out the anode into the outside circuit. Generally, at an anode, negative ions or anions due to its electrical potential tend to react and give off electrons. This is because the electrode connected to the positive terminal of the battery is where the negatively charged ions go to lose electrons, that is, to get oxidized. It is the electrode or terminal by which current enters an electrolytic cell, voltaic cell, battery, etc. 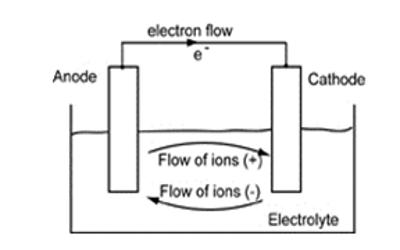 An anode is also the wire or plate having an excess positive charge. Consequently, anions will tend to move towards the anode. Anodes form the surface upon which fuel oxidation takes place with the cell, as such, correct design and materials selection are vital for high performance and long term durability. Historically, the anode has also been known as the zincode.