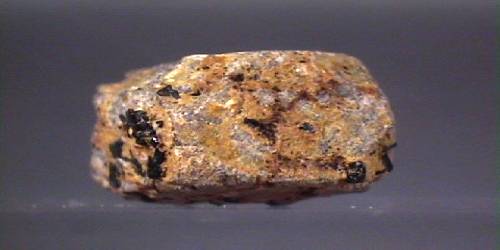 Anorthite is the calcium endmember of plagioclase feldspar. Plagioclase is an abundant mineral in the Earth’s crust. The formula of pure anorthite is CaAl2Si2O8. It is not Radioactive.

Anorthite by definition must contain no more than 10% sodium and no less than 90% calcium in the sodium/calcium position in the crystal structure. It is primarily a rock-forming mineral, it is used in the manufacture of glass and ceramics. Anorthite is the calcium-rich endmember of the plagioclase solid solution series, the other endmember being albite, NaAlSi3O8. The intermediary members are Oligoclase, Andesine, Labradorite, and Bytownite. It also refers to plagioclase compositions with more than 90 molecular percent of the anorthite endmember.

Anorthite is a rare compositional variety of plagioclase. It occurs in mafic igneous rock. It also occurs in metamorphic rocks of granulite facies, in metamorphosed carbonate rocks, and corundum deposits. Its type localities are Monte Somma and Valle di Fassa, Italy. It was first described in 1823. It is rarer in surficial rocks than it normally would be due to its high weathering potential in the Goldich dissolution series.

It also makes up much of the lunar highlands; the Genesis Rock is made of anorthosite, which is composed largely of anorthite. Anorthite was discovered in samples from comet Wild 2, and the mineral is an important constituent of Ca-Al-rich inclusions in rare varieties of chondritic meteorites.