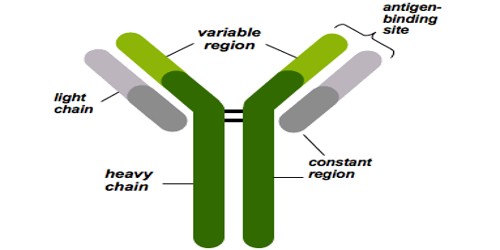 Antibodies (also called immunoglobulins) are large Y-shaped proteins that can stick to the surface of bacteria and viruses. They are proteins produced and secreted by B cells. They are found in the blood or other body fluids of vertebrates. Antibodies are the key element in the adaptive immune system. When an intruder enters the body, the immune system springs into action. These invaders, which are called antigens, can be viruses, bacteria, or other chemicals. For instance, a specific antibody is created to help destroy the chickenpox virus.

The term “antibody” refers to its function, which is to bind to an antigen. The antibody recognizes a unique part of the foreign target called an antigen. Each tip of the “Y” of an antibody contains a structure (like a lock) that fits one particular key-like structure on an antigen. This binds the two structures together. This specific binding capability also allows antibodies to be used in diagnostic applications such as pregnancy tests and in therapeutic applications such as cancer treatments. Using this binding mechanism, an antibody can tag a microbe or an infected cell for attack by other parts of the immune system, or can neutralize its target directly. The production of antibodies is the main function of the humoral immune system.

Major functions of the antibodies are:

Each antibody is different. They are all designed to attack only one kind of antigen (in practice, this means virus or bacteria). When an antigen is found in the body, the immune system will create antibodies to mark the antigen for the body to destroy. For instance, an antibody designed to destroy smallpox is unable to hit the bubonic plague or the common cold.

Antibodies recognize all types of antigens, except self-antigens. This feature is called “immune tolerance.” Though the general structure of all antibodies is very similar, that small region at the tip of the protein is extremely variable. This allows millions of antibodies with different tip structures to exist. Each of these variants can bind to a different antigen. This enormous diversity of antibodies allows the immune system to recognize an equally wide variety of antigens. However, the details of the mechanism remain unknown.