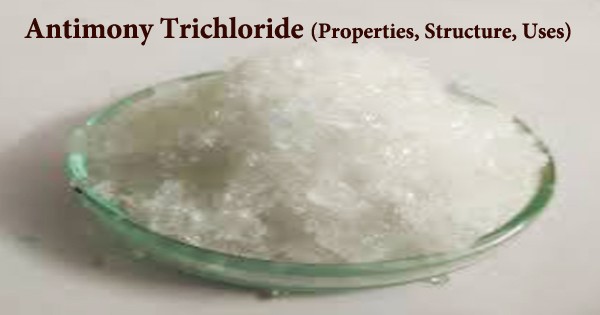 SbCl3 is the formula for antimony trichloride, an inorganic chloride salt. Alchemists named the soft colorless solid with a pungent odor butter of antimony. It’s a crystalline solid that’s non-combustible, transparent, and colorless. The odor is acrid and pungent. It comes in two forms: solid and liquid. Water slowly decomposes it into hydrochloric acid and antimony oxychloride. Chlorine reacts with antimony, antimony trioxide, or antimony trisulfide to produce SbCl3. Antimony trioxide can also be made by treating it with concentrated hydrochloric acid.

Hydrochloric acid dissolves antimony oxychloride, but it is insoluble in water. Metals and tissue are both corroded by it. Antimony butter is a white deliquescent solid that was previously known as antimony butter. It’s made by combining antimony and chlorine in a direct reaction. It is readily hydrolyzed by cold water to form a white precipitate of antimony(III) chloride oxide (antimonyl chloride, SbOCl):

It forms Sb4O5Cl2 with more water, which converts to Sb8O11Cl12 when heated to 460° under argon. Chlorine reacts with antimony, antimony tribromide, antimony trioxide, or antimony trisulfide to produce antimony trichloride. It’s used as a reagent to detect vitamin A and associated carotenoids, forming a blue complex with the carotenoid that can be measured using colorimetry (the Carr-Price test).

Antimony trichloride solutions were once used to dissolve and remove horn stubs from calves and goats. It acts as a Lewis acid, as well as an apoptosis inducer and colorimetric reagent. It is an inorganic chloride and an antimony molecular body. It is derived from a stibane hydride. SbCl3 readily forms complexes with halides, but the stoichiometries aren’t always accurate, as the (C5H5NH)SbCl4 comprises a chain anion with distorted SbIII octahedra.

The resulting solutions have a pH of less than 7.0 and contain moderate amounts of hydrogen ions. To neutralize bases, they react as acids. These neutralizations produce heat, but not nearly as much as inorganic acids, inorganic oxoacids, or carboxylic acid neutralization. While antimony metal and chlorine are expensive to produce, it is doable on a small scale. The safest method is to use liquid antimony trichloride or condensed hydrochloric acid to react chlorine with antimony metal.

SbCl3 is pyramidal in the gas phase, with a Cl-Sb-Cl angle of 97.2° and a bond length of 233 pm. Every Sb in SbCl3 has three Cl atoms at 234 pm, indicating the molecular SbCl3 unit’s persistence; however, there are five additional Cl atoms nearby, two at 346 pm, one at 361 pm, and two at 374 pm. The trichloride is dried over P2O5 or by mixing it with toluene or xylene and distilling (water is carried away with the organic solvent), then sublimed twice in a vacuum into ampoules and sealed. It is deliquescent and can be crystallized from CS2. It fumes in moist air and is decomposed by H2O with precipitation of the basic chloride, but forms a clear solution in dilute HCl.

Small quantities inhaled can cause only irritation of the nose, throat, and airways; large exposures cause extreme airway irritation. Vomiting, purging of bloody stools, a sluggish pulse and low blood pressure; slow, shallow breathing; coma and convulsions; and death are all symptoms of ingestion. When it comes into contact with the skin, it causes serious eye burns or at the very least, severe eye irritation. Gases that are irritating, corrosive, and/or poisonous are generated by fire. Firefighting or dilution water runoff may be corrosive and/or harmful, resulting in pollution.

SbCl3 is a reagent for detecting vitamin A and related carotenoids in the Carr-Price test. The carotenoid reacts with the antimony trichloride to form a blue complex that can be measured using colorimetry. It’s used to produce antimony salts and medications, to fireproof textiles, as a catalyst in many organic reactions, as a reagent for chloral, aromatic hydrocarbons, vitamin A, and drug detection, and as a catalyst in many organic reactions.