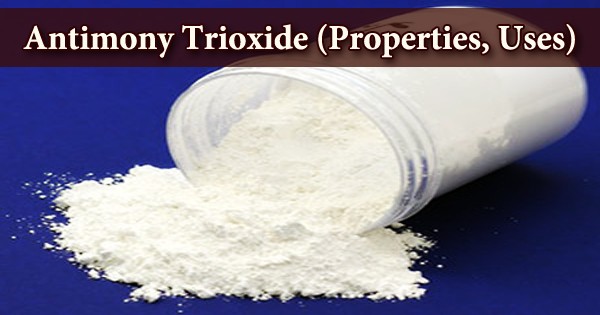 Antimony trioxide (Antimony(III) oxide) is an inorganic compound with the formula Sb2O3, which, along with antimony tetroxide and antimony pentoxide, is the current trio of antimony-oxygen compounds with industrial applications. Antimony is present in nature as the minerals valentinite and senarmontite, and it is the most common industrial compound of antimony. Antimony trioxide is a compound that is used in the production of certain polyethylene terephthalate (PET) plastics, which are used in the production of food and beverage containers. Plastic trays that are ovenproof or microwaveable, as well as certain plastic water bottles, are examples.

Antimony can combine with oxygen to form a variety of oxides, including Sb2O3, Sb2O4, Sb2O5, Sb6O13, and Sb2O, as well as gaseous SbO. However, only the first three compounds are essential in industrial development, with the rest of the oxides primarily serving as a byproduct of various antimony production processes. With hydrolysis, Sb2O3 dissolves in aqueous solutions, much like other polymeric oxides. The very rare mineral stibioclaudetite is made up of a blended arsenic-antimony oxide. To increase the potency of halogenated flame retardants, antimony trioxide (ATO) is widely used as a co-synergist.

The halogen and antimony oxide must be present in a vapor phase at temperatures above 315°C for antimony oxide to function. Antimony halides and oxyhalides form at these temperatures and serve as flame extinguishing moieties by quenching radicals as they form. The rhombic crystal Sb2O3 commonly derived from SbCl3 hydrolysis can burn to red heat in an inert gas or in vacuum, and can sublimate to square crystal. Antimony(III) oxide was formed at four sites in the EU27 as of 2010. It can be produced in one of two ways: by re-volatilizing crude antimony(III) oxide or by oxidizing antimony metal.

Antimony trioxide is a white powder with a density of 5.67 grams per cubic centimeter. When hot, it turns yellow and then returns to white when cooled. It will molten into a yellow or gray liquid at 656 °C, turning into a white asbestos-like mercerizing material. It is mildly soluble in water, ethanol, and dilute acid, and is readily soluble in concentrated hydrochloric acid, oxalic acid, and tartaric acid, as well as fuming nitric acid and fuming sulfuric acid; when dissolved in alkali, it forms antimonite. To minimize dust, the manufacturers sell a wetted grade of antimony oxide. This is made by the addition of 3-4% plasticizer (DIDP, DOP, DINP, or ethylene glycol). Manufacturers and specialist firms develop concentrates. In Europe, antimony metal oxidation is the most common. From virgin material, many processes are used to produce crude antimony(III) oxide or metallic antimony.

Dry and wet preparation methods are the most popular for antimony trioxide. The dry method involves reducing the crude sulfur trioxide produced by calcining sulfantimonide ore to metallic antimony in the presence of coke and soda as a melting promoter. The wet method involves generating antimony trichloride by leaching sulfur antimony ore with hydrochloric acid and then hydrolyzing it with caustic soda. Crude stibnite is oxidized to crude antimony(III) oxide in furnaces that operate at temperatures ranging from 500 to 1,000 degrees Celsius. The reaction is the following:

To have excellent flame retarding properties, antimony oxide can be mixed with huntite/hydromagnesite fillers. Zinc borate can also be used to minimize antimony trioxide levels. Zinc stannate and ammonium octamolybdate are two other performance-enhancing additives. In furnaces, antimony metal is oxidized to antimony(III) oxide. The reaction is exothermic. Sublimation produces antimony(III) oxide, which is recovered in bag filters. The size of the formed particles is determined by the furnace’s process conditions and gas flow. The reaction can be represented schematically as follows:

Antimony trioxides are used as synergists to boost the operation of halogenated flame retardants by preventing the chain reaction of the flame gas process by releasing halogenated radicals in a stepwise manner. The antimony is mainly existed Sb2O3 (with a small amount being in sulfide form) was continuously fumed into the gas phase; after flue gas purification, transfer the sulfide into Sb2O3 by burning in the flue and combustion chamber, with the oxides in the flue gas being collected separately in each section of the collecting unit, with antimony oxide collected in the flue vortex.

Antimony(III) oxide is an amphoteric oxide that dissolves in aqueous sodium hydroxide to form the meta-antimonite NaSbO2, which can be isolated as a trihydrate. This lustrous, hard metal is often alloyed with other elements. It’s used in a wide range of industries, including those that make or use batteries, printing machines, bearings, textiles, and ceramics. It caused two employees in the ceramics industry to have positive patch test reactions. Antimony(III) oxide dissolves in condensed mineral acids to form salts, which then hydrolyze when diluted with water. The trioxide is oxidized to antimony(V) oxide with nitric acid.

Antimony trioxide is also added to some flame retardants in consumer goods, such as upholstered furniture, textiles, carpeting, plastics, and children’s products, to make them more effective. Some antimony trioxide containers that are exposed to high temperatures (especially above 110 °F) can leach into food and beverages. The oxide is reduced to antimony metal when heated with carbon. The unstable and highly toxic gas stibine is formed when other reducing agents, such as sodium borohydride or lithium aluminum hydride, are used. When heated with potassium bitartrate, a complex salt potassium antimony tartrate, KSb(OH)2•C4H2O6 is formed.

Antimony trioxide is insoluble in water, and drying at 110°C results in a maximum loss of 0.1 wt percent. Since ancient times, it has been used as a white pigment. Antimony oxide pigmentation in plastics can be managed and modified by carefully selecting a Sb2O3 grade with a particular particle size. The whitest color and highest opacity are imparted by the product with the smallest particle size and the narrowest particle-size range. Antimony(III) oxide use in the United States and Europe is about 10,000 and 25,000 tonnes per year, respectively.

In combination with chlorine-containing resins, antimony oxide is commonly used in the preparation of fire-retardant paint. When the paint film is exposed to fire, the chlorine gas released by the decomposition of the resin portion reacts with the antimony oxide to create an antimony chloride vapor that covers the flames. Such flame retardants are found in electrical apparatuses, textiles, leather, and coatings. Other applications:

Antimony trioxide is also used in flame retardants, pigments, and ceramics, as well as to paint iron and copper, decolorize glass, and as a dye, pigment, and printing ink. It is thought to have carcinogenic potential in humans. It is, however, good laboratory practice to prepare it fresh and then dispose of it down the fume cupboard sink with plenty of water. Strong bases, strong acids, oxoacids, epoxides, halogenated acids, chlorinated rubber, and bromine trifluoride can all be avoided.