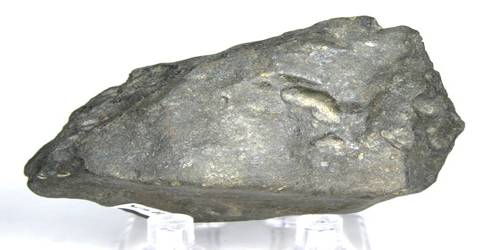 Antitaenite is a meteoritic metal alloy mineral composed of iron and nickel, 20–40% Ni (and traces of other elements) that has a face-centered cubic crystal structure. There are three other known Fe-Ni meteoritic minerals: kamacite, taenite, and tetrataenite. Originally described from Vaca Muerta meteorite, Taltal, Antofagasta Province, Antofagasta Region, Chile.

Its existence as a new mineral species occurring in both iron meteorites and in chondrites was first recognized in 1995 but the IMA didn’t approve paramagnetic antitaenite (a variety of taenite now). Gamma (fcc) Fe-Ni alloys with low-Ni (c. 25% Ni) are probably inhomogeneous on a nanometer scale. The pair of minerals antitaenite and taenite constitute the first example in nature of two minerals that have the same crystal structure (face-centered cubic) and can have the same chemical composition (same proportions of Fe and Ni)—but differ in their electronic structures: taenite has a high magnetic moment whereas antitaenite has a low magnetic moment.