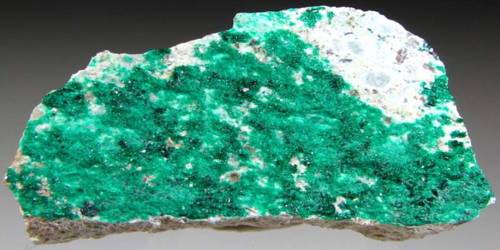 Antlerite is a greenish hydrous copper sulfate mineral, with the formula Cu3(SO4)(OH)4. It has been an important ore of copper and forms nice mineral specimens. It typically forms tabular to acicular or fibrous crystals. It forms mainly in sheltered areas where weathering is low, which permits the accumulation of copper ions and enhancement in the acidity of water films. In exposed areas, the main corrosion product is brochantite.

Antlerite is a greenish hydrous copper sulfate mineral that was first discovered in Antler mine, Mojave Co., Arizona in 1889. The mineral was named after its place of discovery. Antlerite can be observed in black green, black, emerald green, light green and green. It exhibits non-fluorescent and non-magnetic properties, vitreous luster, pale green streak and translucent appearance. It is formed from the oxidation of copper ore minerals along with other oxidation zone minerals.

Antlerite is typically formed in the oxidized zone of copper deposits under highly acid conditions, especially in arid regions. The mineral is closely associated with gypsum, linarite, natrochalcite, krohnkite, chalcanthite, atacamite and brochantite.

It occurs in tabular, acicular, or fibrous crystals with a vitreous luster. Originally believed to be a rare mineral, antlerite was found to be the primary ore of the oxidized zones in several copper mines across the world, including the Chuquicamata mine in Chile, and the Antler mine in Arizona, the US from which it takes its name. It is chemically and optically similar in many respects to other copper minerals such as malachite and brochantite, though it can be distinguished from the former by a lack of effervescence in hydrochloric acid.