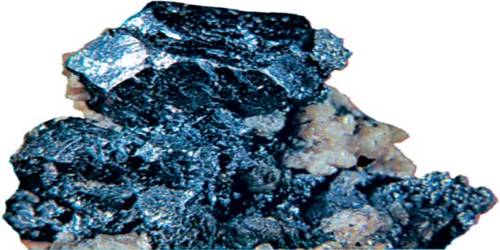 Argentite is silver sulfide mineral, is an important constituent of silver ore deposits. In mineralogy, argentite is cubic silver sulfide (Ag2S), which can only exist at temperatures above 173°C, 177°C, or 179°C. It contains 87% silver and forms blackish-gray coatings or masses with a metallic luster and a shining black STREAK. When it cools to ordinary temperatures it turns into its monoclinic polymorph, acanthite. Argentite belongs to the Galena group. It is a dark gray or black mineral of metallic luster that consists of native sulfide silver and is a valuable silver ore

An important ore of silver, it is found in moderately low-temperature hydrothermal sulfide veins and in zones of secondary enrichment. Its name comes from the Latin “Argentum” meaning “silver.” This form of acanthite is occasionally found as uneven cubes and octahedra, but more often as dendritic or earthy masses, with a blackish lead-grey color and metallic luster. Characteristic is the ease with which it is cut. Argentite is stable only above 179 deg C; thus, although few crystals found appear outwardly to be isometric, they are actually composed of acanthite, a chemically identical paramorph belonging to the monoclinic system. Argentite’s hardness is 2 – 2.5 and specific gravity is 7.2-7.4.

It occurs in mineral veins, and when found in large masses, as in Mexico and in the Comstock Lode in Nevada, it forms an important ore of silver. The mineral was mentioned in 1529 by G. Agricola, but the name argentite was not used until 1845 and is due to W. Haidinger. Old names for the species are Glaserz, silver-glance and vitreous silver. A related copper-rich mineral occurring e.g. in Jalpa, Zacatecas, Mexico, is known as jalpaite.