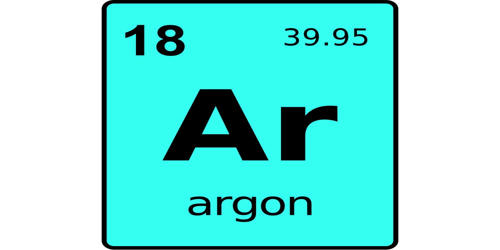 Argon is a chemical element with the symbol Ar and atomic number 18. It is in group 18 of the periodic table and is a noble gas. Argon is the third-most abundant gas in the Earth’s atmosphere, at 0.934% (9340 ppmv). Colorless, odorless, and tasteless, argon gas was isolated (1894) from the air by the British scientists’ Lord Rayleigh and Sir William Ramsay. It was suspected to be present in air by Henry Cavendish in 1785 but wasn’t discovered until 1894 by Lord Rayleigh and Sir William Ramsay.

Argon has approximately the same solubility as oxygen and it is 2.5 times as soluble in water as nitrogen. The complete octet (eight electrons) in the outer atomic shell makes argon stable and resistant to bonding with other elements. Its triple point temperature of 83.8058 K is a defining fixed point in the International Temperature Scale of 1990. This chemically inert element is colorless and odorless in both its liquid and gaseous forms. It is not found in any compounds.