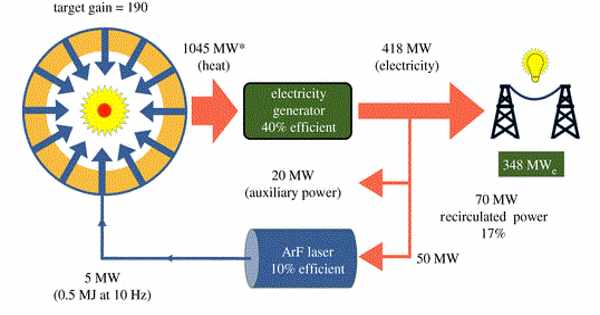 The argon fluoride laser (ArF laser) is a type of excimer laser, also known as an exciplex laser. It is a deep ultraviolet laser with a wavelength of 193 nanometers that is commonly used in the production of semiconductor integrated circuits, eye surgery, micromachining, and scientific research. “Excimer” is an abbreviation for “excited dimer,” while “exciplex” is an abbreviation for “excited complex.”

An excimer laser typically employs a mixture of a noble gas (argon, krypton, or xenon) and a halogen gas (fluorine or chlorine), which emits coherent stimulated radiation (laser light) in the ultraviolet range under suitable conditions of electrical stimulation and high pressure.

An argon fluoride laser absorbs energy from a source, causing the argon gas to react with the fluorine gas-producing argon monofluoride, a temporary complex, in an excited energy state:

The complex can undergo spontaneous or stimulated emission, reducing its energy state to a metastable, but a highly repulsive ground state. The ground state complex quickly dissociates into unbound atoms:

As a result, an exciplex laser emits energy at 193 nm, which is in the far ultraviolet portion of the spectrum, corresponding to an energy difference of 6.4 electron volts between the complex’s ground and excited states.

Deep-ultraviolet photolithography for the fabrication of microelectronic devices (i.e., semiconductor integrated circuits or “chips”) has been the most common industrial application of ArF excimer lasers.

Hg-Xe lamps were used for lithography at 436, 405, and 365 nm wavelengths from the early 1960s to the mid-1980s. However, with the semiconductor industry’s need for both finer resolution (for denser and faster chips) and higher production throughput (for lower costs), lamp-based lithography tools could no longer meet the industry’s needs.

The superior laser-target coupling with ArF’s deep UV light (193 nm) may allow for the high target gains required for the energy application at much lower laser energies than previously thought possible. The combination of deep UV light and a broad native bandwidth (>5 THz) suppresses laser-plasma instabilities, which limit the laser intensity and ablation pressures of current 351 nm frequency-tripled glass lasers, which are the traditional fusion laser drivers.