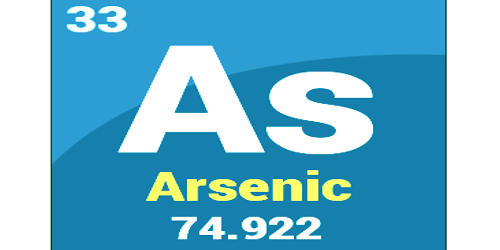 Arsenic is a chemical element with the symbol As and atomic number 33. It is a naturally occurring allotropic pnictogen and metalloid trace element with the atomic symbol [As] and atomic weight 74.92 that is found in water, air, food, and soil, and has a role as a micronutrient. The abundance of arsenic in the Earth’s crust is about five grams per ton; the cosmic abundance is estimated as about four atoms per million atoms of silicon. It was known as early as the fourth century B.C., when Aristotle referred to one of its sulfides as “sandarach,” or red lead, according to Chemicool.

Arsenic is a member of group Va of the periodic table, which combines readily with many elements. It is a steel-gray, brittle solid with low thermal and electrical conductivity. There are some forms of elemental arsenic are metal-like and is best classified as a non-metal. It is a crystalline metalloid found in the Earth’s crust, but in its free form, it is quite rare.

Arsenic occurs in many minerals, usually in combination with sulfur and metals, but also as a pure elemental crystal. It is a nonessential trace element that is widely distributed in nature. In the environment, arsenic is combined with oxygen, chlorine, and sulfur to form inorganic arsenic compounds.

Arsenic is a metalloid. It has various allotropes, but only the gray form, which has a metallic appearance, is important to the industry. It is a naturally occurring element widely distributed in the earth’s crust. It is characterized as a white, yellow, gray metallic, or black solid that is odorless.

Arsenic was used in medicinal agents in the 19th and early 20th centuries, but has been replaced by safer and more effective agents and has not been in use for over 50 years.

However, arsenic poisoning occurs in multicellular life if quantities are larger than needed. Arsenic contamination of groundwater is a problem that affects millions of people across the world. The most important use of arsenic in the United States is in wood preservatives.