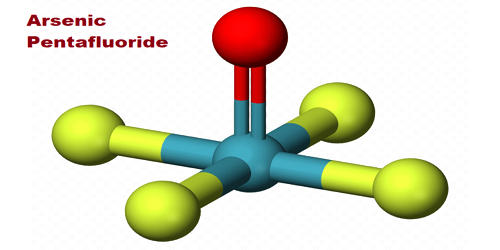 Arsenic pentafluoride (AsF5) is a chemical compound of arsenic and fluorine. It is a toxic, colorless gas. It is an extremely toxic and corrosive gas that destroys red blood cells and can cause widespread systemic injury. The oxidation state of arsenic is +5. It is a poisonous metalloid that has many allotropic forms: yellow (molecular non-metallic) and several black and grey forms (metalloids) are a few that are seen.

Arsenic pentafluoride can be prepared by direct combination of arsenic and fluorine: 2As + 5F2 → 2AsF5

It can also be prepared by the reaction of arsenic trifluoride and fluorine: AsF3 + F2 → AsF5

or the addition of fluorine to arsenic pentoxide or arsenic trioxide.

It can be prepared by fluorination of elemental arsenic or As2O3. It is an even stronger Lewis acid than its lighter homolog PF5 and a strong fluoride-ion acceptor. It is prepared by reacting fluorine with arsenic metal or arsenic trifluoride. As a strong Lewis acid fluoride, it is used in the preparation of ionic complexes and, in conjunction with Brönsted acids, forms conjugate superacids. 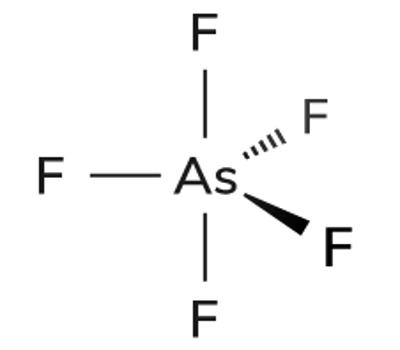 Arsenic pentafluoride is a colorless gas and has a trigonal bipyramidal structure. Three metalloidal forms of arsenic with different crystal structures are found free in nature (the minerals arsenopyrite and the much rarer arsenolamprite and pararsenolamprite), but it is more commonly found as a compound with other elements. In the solid-state, the axial As−F bond lengths are 171.9 pm and the equatorial 166.8 pm. Its point group is D3h. Arsenic pentafluoride cylinders should be returned to the compressed gas distributor when emptied or no longer used.

Arsenic pentafluoride forms halide complexes and is a powerful acceptor as shown by the reaction with sulfur tetrafluoride forming an ionic complex.

AsF5 is nonflammable but is readily hydrolyzed in the presence of water and humid environments to form arsenic and hydrogen fluoride.

Arsenic pentafluoride is an extremely dangerous toxin, mainly poisoning liver cells. It has a smell that is similar to vinyl chloride gas. Inhalation is similar to arsine gas and may cause headaches, delirium, nausea, vomiting, general malaise, tightness in the chest, and pain in the abdomen or loins.