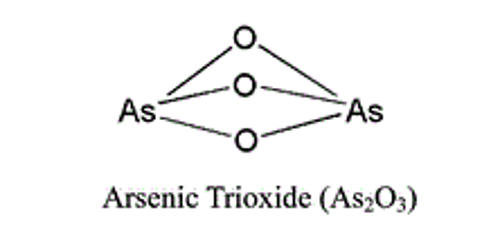 Arsenic cannot be destroyed in the environment; it can only change its form. Arsenic in the air will settle to the ground or is washed out of the air by rain. Many arsenic compounds can dissolve in water. Fish and shellfish can accumulate arsenic, but this arsenic is mostly in a form that is not harmful. Approximately 50,000 tonnes are produced annually. Many applications are controversial given the high toxicity of arsenic compounds. 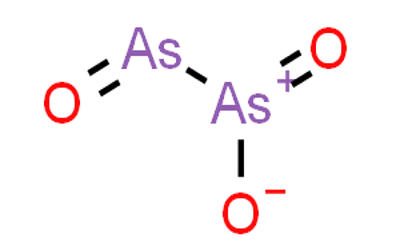 Common side effects include vomiting, diarrhea, swelling, shortness of breath, and headaches. Severe side effects may include APL differentiation syndrome and heart problems. Arsenic trioxide can cause a serious and sometimes fatal complication by changing the way your immune system works. Use during pregnancy or breastfeeding may harm the baby. Arsenic trioxide has the formula As2O3. How it works in cancer is not entirely clear. The mechanism of action of arsenic trioxide is not completely understood. This agent causes damage to or degradation of the promyelocytic leukemia protein/retinoic acid receptor-alpha (PML/RARa) fusion protein; induces apoptosis in acute promyelocytic leukemia (APL) cells and in many other tumor cell types; promotes cell differentiation and suppresses cell proliferation in many different tumor cell types, and is pro-angiogenic.

Arsenic trioxide is an inorganic compound with the formula As2O3. This commercially important oxide of arsenic is the main precursor to other arsenic compounds, including organoarsenic compounds. It was approved for medical use in the United States in 2000. It is on the World Health Organization’s List of Essential Medicines. Approximately 50,000 tonnes are produced a year. Due to its toxicity, a number of countries have regulations around its manufacture and sale.