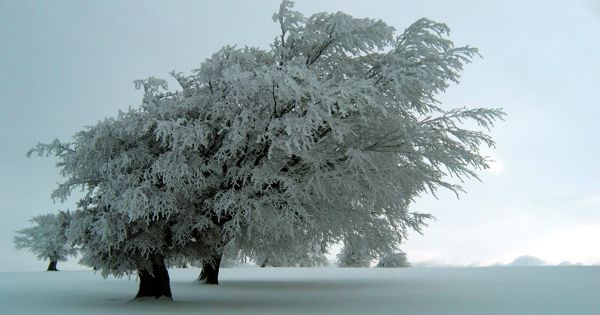 Atmospheric icing occurs in the atmosphere when water droplets freeze on objects they come in contact with. Atmospheric icing of vessels occurs when freezing rain, wet snow, or super-cooled fog, (liquid drops at below-freezing temperatures) come in contact with exposed surfaces. Icing conditions can be particularly dangerous to aircraft, as the built-up ice changes the aerodynamics of the flight surfaces, which can increase the risk of a stall. It can affect the operation of antennas, optical devices, meteorological instruments, and other topside equipment. For this reason, on-board ice protection systems have been developed, and aircraft are often deiced prior to take-off in icy environments. Because it occurs high on a ship, including masts, antennas, and rigging, it has the potential for decreasing ship stability by raising the center of gravity.

Water does not always freeze at 0 °C (32 °F). Water that persists in a liquid state below this temperature is said to be supercooled, and supercooled water droplets cause icing on aircraft. Atmospheric icing is a serious problem for aircraft operating in super-cooled liquid water clouds. Below −20 °C (−4 °F), icing is rare because clouds at these temperatures usually consist of ice particles rather than supercooled water droplets. Below −48 °C (−54 °F), supercooled water cannot exist, therefore icing is impossible. Atmospheric icing affects a wide variety of man-made structures in many countries. It is generally well known to occur in northern countries like Japan, Canada, United Kingdom, Iceland, Finland, Hungary, Norway, Czech Republic, Romania, and Russia, as well as many other countries in both hemispheres.

Man-made structures at the top of mountains are often exposed to rime icing. Icing also occurs on towers, wind turbines, boats, oil rigs, trees and other objects exposed to low temperatures and water droplets. In other areas, wet snow or freezing rain likewise affect infrastructures at lower altitudes. Unmanned aircraft are particularly sensitive to icing. In cold climates on land, atmospheric icing can be common as elevated terrain interacts with cold clouds. Therefore, power lines, wind turbines, telecommunication towers or high masts, ski lifts, and other buildings are designed to withstand the loads and other adverse effects due to icing, as well as ice loads affecting their mechanical strength or operational reliability in many ways.

Ice loads are a major cause of catastrophic failures of overhead electric power lines. Their estimation is, therefore, crucial in the structural design of power line systems and can be done by numerical icing models that include meteorological data. Most countries have their own standards to take care of ice loads on their structures.