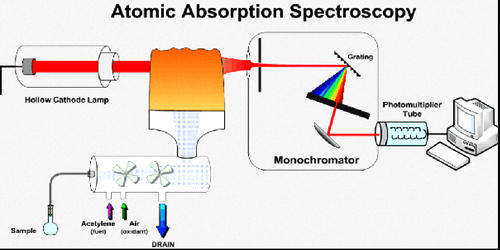 In analytical chemistry, the technique is used for determining the concentration of a particular element (the analyte) in a sample to be analyzed. Therefore, for AAS measurements the analyte must be first converted into gaseous atoms, usually by application of heat to a cell called an atomizer. AAS can be used to determine over 70 different elements in solution, or directly in solid samples via electrothermal vaporization, and is used in pharmacology, biophysics, archaeology and toxicology research.

Atomic emission spectroscopy was first used as an analytical technique, and the underlying principles were established in the second half of the 19th century by Robert Wilhelm Bunsen and Gustav Robert Kirchhoff, both professors at the University of Heidelberg, Germany. Despite these early studies, AAS was mostly restricted to astrophysical applications until the 1950s.

The modern form of AAS was largely developed during the 1950s by a team of Australian chemists. Nowadays, atomic absorption spectrometry (AAS) systems are comparatively inexpensive element selective detectors, and some of the instruments also show multi(few)-element capability. They were led by Sir Alan Walsh at the Commonwealth Scientific and Industrial Research Organisation (CSIRO), Division of Chemical Physics, in Melbourne, Australia.

The technique makes use of the atomic absorption spectrum of a sample in order to assess the concentration of specific analytes within it. The technique uses basically the principle that free atoms (gas) generated in an atomizer can absorb radiation at a specific frequency. It requires standards with known analyte content to establish the relation between the measured absorbance and the analyte concentration and relies therefore on the Beer-Lambert law.