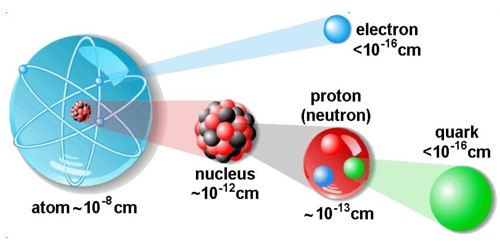 Atomic Nucleus – Center of an Atom

The atomic nucleus is a tiny massive entity at the center of an atom. It is the central area of the atom. It is composed of two kinds of subatomic particles: protons and neutrons, and is surrounded by the electron cloud. The size (diameter) of the nucleus is between 1.6 fm (10−15 m) (for a proton in light hydrogen) to about 15 fm (for the heaviest atoms, such as uranium). These sizes are much smaller than the size of the atom itself by a factor of about 23,000 (uranium) to about 145,000 (hydrogen). Although it is only a very small part of the atom, the nucleus has most of the mass. Occupying a volume whose radius is 1/100,000 the size of the atom, the nucleus contains most (99.9%) of the mass of the atom. Almost all of the mass in an atom is made up from the protons and neutrons in the nucleus with a very small contribution from the orbiting electrons.

In 1844, Michael Faraday used nucleus to describe the “central point of an atom”. The modern atomic meaning was proposed by Ernest Rutherford in 1912. The use of the word nucleus in atomic theory, however, did not happen immediately. In 1916, for example, Gilbert N. Lewis wrote in his famous article The Atom and the Molecule that “the atom is composed of the kernel and an outer atom or shell”.