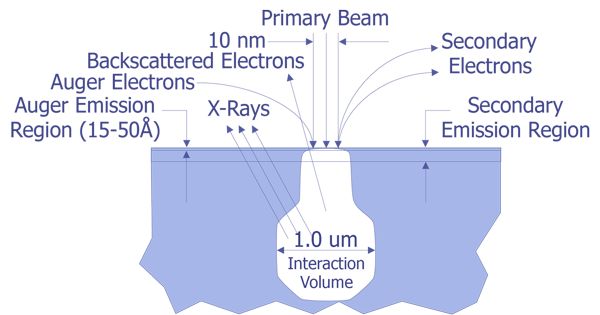 Auger Electron Spectroscopy (AES) provides quantitative elemental and chemical state information from surfaces of solid materials. It is a way of telling what chemical elements are at the surface of an object. It is a common analytical technique used specifically in the study of surfaces and, more generally, in the area of materials science. It is one of the most commonly employed surface analysis techniques. It uses the energy of emitted electrons to identify the elements present in a sample, similar to X-ray photoelectron spectroscopy (XPS).

Auger Electron Spectroscopy (AES) is a surface-specific analytical technique that utilizes a high-energy, finely focused electron beam as an excitation source. It has become one of the most important tools for the investigation of interfaces in the field of materials science.

When an electron is removed from a core level of an atom, a higher energy level electron may fall in the vacancy. If the energy released by the fall is transferred to another electron, the latter (called Auger electron) will be emitted from the atom, in what is called the Auger effect, after the French physicist who discovered the phenomenon, Pierre Auger. First discovered in 1923 by Lise Meitner and later independently discovered once again in 1925 by Pierre Auger.

The kinetic energy levels of the Auger electrons depend on the type of atoms from which the electrons were ejected, and the chemical environment of the atoms. It is a surface-specific analytical technique that utilizes a high-energy, finely-focused electron beam as an excitation source. Auger electrons are produced when the excited atoms release the extra energy to an electron that is then emitted as an Auger electron.

An introduction to the application of Auger electron spectroscopy to the surface chemical analysis of nanoparticles is given. AES provides about surface layers or thin-film structures is important for many industrial and research applications where surface or thin-film composition plays a critical role in performance including – nanomaterials, photovoltaics, catalysis, corrosion, adhesion, semiconductor devices and packaging, magnetic media, display technology, and thin-film coatings used for numerous applications.

Auger electron spectroscopy is a mature method in the field of surface chemical analysis. AES consists of bombarding a sample with energetic electrons and measuring the energy of the Auger electrons, obtaining spectra that can be used to get information about the identity and environment of the emitting atoms. Since the Auger electron energy emitted from the sample has a value specific to the element, the element on the sample surface can be identified by measuring the electron energy.