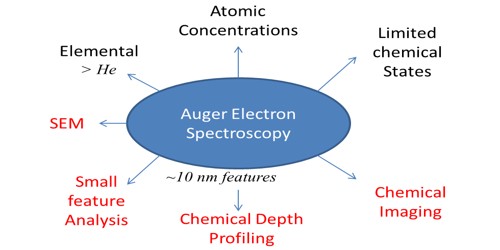 Auger electron spectroscopy is a way of telling what chemical elements are at the surface of an object. It is based on the Auger effect—a chain of radiationless transitions in an atom in which one of its inner levels is ionized. It provides quantitative elemental and chemical state information from surfaces of solid materials.

It is an electron beam is used to excite the electronic states of the near-surface atoms of a solid. When an electron is removed from a core level of an atom, a higher energy level electron may fall in the vacancy. If the energy released by the fall is transferred to another electron, the latter (called Auger electron) will be emitted from the atom, in what is called the Auger effect, after the French physicist who discovered the phenomenon, Pierre Auger. This process ends with the ejection of an electron, which is known as an Auger electron.

Auger spectroscopy can be considered as involving three basic steps: