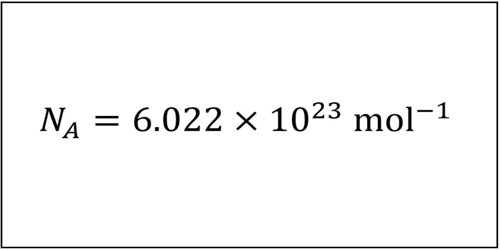 The Avogadro constant (symbols: L, NA) is the number of particles (usually atoms or molecules) in one mole of a given substance. Its value is equal to 6.02214129(27)×1023 mol−1. It is the number of units in one mole of any substance. The mole allows scientists to calculate the number of elementary entities (usually atoms or molecules) in a certain mass of a given substance. The constant was named after the Italian scientist Amedeo Avogadro. Avogadro is most famous for his hypothesis that equal volumes of different gases at the same temperature and pressure contain the same number of particles. With Avogadro’s number, scientists can discuss and compare very large numbers, which is useful because substances in everyday quantities contain very large numbers of atoms and molecules.

Calculate the number of water molecules in 0.5 mol of water.