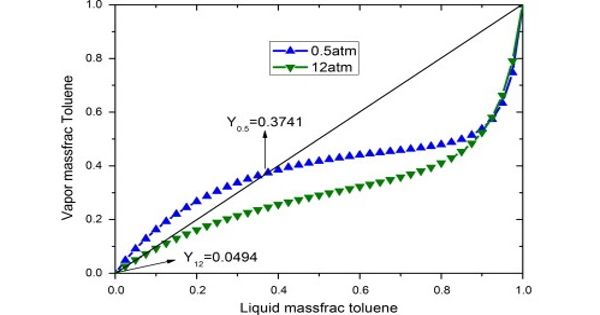 An azeotrope is a mixture of two or more liquids that displays the same level of concentration in the liquid and vapor phase. These mixtures can either have a lower boiling point or a higher boiling point of the components.

Some azeotropic mixtures of pairs of compounds are known, and many azeotropes of three or more compounds are also known. This is in contrast to ideal solutions with one component typically more volatile than the other; this is how we use distillation to separate materials. In such a case it is not possible to separate the components by fractional distillation. If the mixture forms an azeotrope, the vapor and the liquid concentrations are the same, which preventing separation via this approach. There are two types of azeotropes: minimum boiling azeotrope and maximum boiling azeotrope.

A solution that shows a greater positive deviation from Raoult’s law forms a minimum boiling azeotrope at a specific composition. The boiling point of an azeotropic mixture may be higher or lower than that of any of its components. For example, an ethanol-water mixture (obtained by fermentation of sugars) on fractional distillation yields a solution containing at most 97.2% by volume of ethanol. The components of the solution cannot be separated by simple distillation, and, therefore, such methods as adding a third component to change the volatility of the azeotrope or using two distillation columns operating at different pressures are used. Once this composition has been achieved, the liquid and vapor have the same composition, and no further separation occurs.

A solution that shows a large negative deviation from Raoult’s law forms a maximum boiling azeotrope at a specific composition. Azeotropic distillation as an early and important special distillation process is commonly used in laboratories and industries. Nitric acid and water is an example of this class of azeotrope. Azeotropic distillation is accomplished by adding to the liquid phase a volatile third component which changes the volatility of one of the two components more than the other so that the components are separated by distillation. This azeotrope has an approximate composition of 68% nitric acid and 32% water by mass, with a boiling point of 393.5 K (120.4 °C).