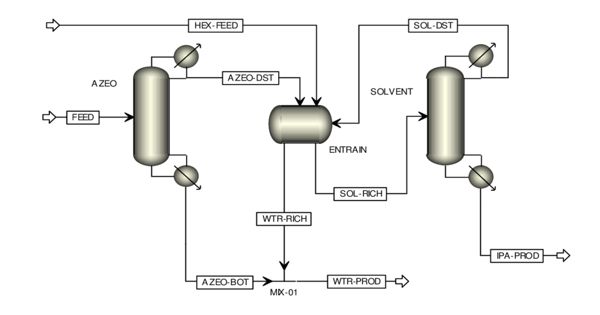 Azeotropic Distillation – a Process of Separating Components of an Azeotropic Mixture

Azeotropic Distillation can be defined as the process of separating the components of an azeotropic mixture by distillation. In chemistry, it is any of a range of techniques used to break an azeotrope in distillation. An azeotrope is a liquid mixture that has a constant boiling point and whose vapor has the same composition as the liquid. In chemical engineering, azeotropic distillation usually refers to the specific technique of adding another component to generate a new, lower-boiling azeotrope that is heterogeneous (e.g. producing two, immiscible liquid phases), such as the example below with the addition of benzene to water and ethanol. The separation of azeotropic mixtures with help of distillation is an important unit operation in the chemical and pharmaceutical industry.

Azeotropic distillation is a particular type of distillation by which it is possible to separate azeotropes. Azeotropes are mixtures of two or more substances that boil together at a constant temperature.

Azeotropic distillation is a less applied method due to the disadvantages of high energy investment and capital cost along with health and safety issues while working with carcinogenic (benzene) and flammable (cyclohexane) solvents. This practice of adding an entrainer that forms a separate phase is a specific sub-set of (industrial) azeotropic distillation methods, or a combination thereof. It is a process to break azeotrope where another volatile component, called the entrainer, the solvent, or the mass separating agent (MSA), is added to form a new lower-boiling azeotrope that is heterogeneous. In some senses, adding an entrainer is similar to extractive distillation.

For low boiling azeotropes, the volatile component cannot be fully purified by distillation. The most common method of breaking an azeotrope involves the addition of a material separation agent that has the ability to change the molecular interactions between the components of the azeotrope. To obtain the pure material one must “break the azeotrope”, which involves a separation method that does not rely on distillation. In order to achieve this, material separation agents such as benzene, hexane, cyclohexane, pentane, diethyl ether, and acetone are commonly used.

A common approach involves the use of molecular sieves. In modern practices, the ethanol-water azeotrope is usually broken with the help of toluene. Treatment of 96% ethanol with molecular sieves gives the anhydrous alcohol, the sieves having adsorbed water from the mixture. Other suitable options for the dehydration of a mixture of water and ethanol include cyclohexane, isooctane, and even heptane. The sieves can be subsequently regenerated by dehydration using a vacuum oven.