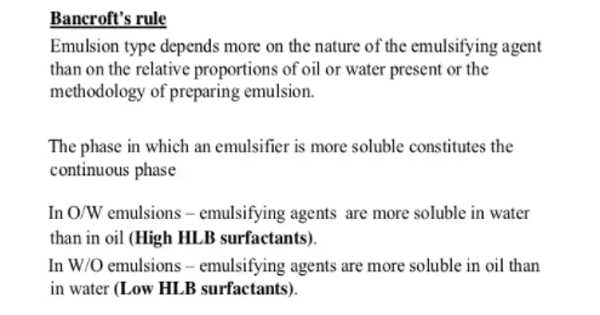 According to the Bancroft rule, “the continuous phase is the phase in which an emulsifier is more soluble.” Wilder Dwight Bancroft, an American physical chemist, proposed the rule in the 1910s, and it was named after him.

Emulsions are two immiscible liquid phases in a biphasic liquid system. The presence of these phases is such that one phase is dispersed in the other continuous phase. Emulsions are a type of colloids, which are a more general class of two-phase matter systems.

Although the terms colloid and emulsion are sometimes used interchangeably, the emulsion is only used when both phases are liquid. Mayonnaise, milk, lotions, and other products are examples of emulsions.

There are some exceptions to Bancroft’s rule, but it’s a good starting point for most systems. The hydrophilic-lipophilic balance (HLB) of a surfactant can be used to determine whether or not it is suitable for the desired emulsion.

According to Bancroft’s rule, the emulsifier determines the type of emulsion, and the emulsifier must be soluble in the continuous phase. This empirical finding can be explained by taking into account the interfacial tension at the oil-surfactant and water-surfactant interfaces.

The volume fraction of both phases and the type of emulsifier used to emulsify them determine whether an emulsion of oil and water becomes a “water-in-oil” emulsion or a “oil-in-water” emulsion.