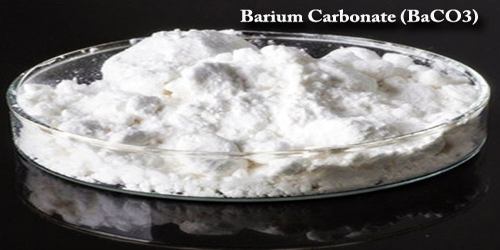 Barium Carbonate (BaCO3) is a white powder, and it is also known as witherite. It is a chemical compound used in rat poison, bricks, ceramic glazes, and cement. The chemical formula for barium carbonate is BaCO3. It also occurs in a mineral known as witherite and also prepared from barytes through precipitation. It is toxic in nature.

Barium carbonate is insoluble in water and soluble in most acids, with the exception of sulfuric acid. Salts, basic, such as Barium carbonate, are generally soluble in water. The resulting solutions contain moderate concentrations of hydroxide ions and have pH’s greater than 7.0. They react as bases to neutralize acids. These neutralizations generate heat, but less or far less than is generated by neutralization of the bases in reactivity group 10 (Bases) and the neutralization of amines. They usually do not react as either oxidizing agents or reducing agents but such behavior is not impossible.

BaCO3 is also common in turquoise glazes. It should be kept under low quality below 20% and protective measures to be taken while handling the chemical compound. It is insoluble in water and soluble in most acids, with the exception of sulfuric acid. It has a specific gravity of 4.275. It is toxic by ingestion.

Witherite crystallizes in the orthorhombic system. The crystals are invariably twinned together in groups of three, giving rise to pseudo-hexagonal forms somewhat resembling bipyramidal crystals of quartz, the faces are usually rough and striated horizontally. It transforms into a hexagonal phase at 1084 K that changes into a cubic phase at 1254 K.

Barium carbonate is an additive in oil-well drilling muds. The barite suspensions used in the oil well drilling industry can destabilize when soluble materials such as gypsum are present in the mud. The presence of gypsum leads to coagulation and a loss of consistency in the drilling muds. When added to the muds, barium carbonate precipitates the gypsum and prevents the destabilization of the barite suspension.

Barium carbonate reacts with acids such as hydrochloric acid to form soluble barium salts, such as barium chloride:

However, the reaction with sulfuric acid is poor, because barium sulfate is highly insoluble.