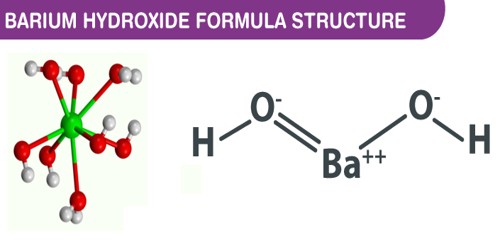 Barium hydroxide is a chemical compound. Its chemical formula is Ba(OH)2. It has a molecular weight of 121.6324 g/mol. It contains barium and hydroxide ions. It occurs as an anhydrate whose prismatic, colorless crystals are very deliquescent. It is commonly found in nature, as present in many minerals.

It is used as a source of barium to produce other barium salts as barium phosphate, barium sulfide and barium sulfate that are using in the chemical industry in diverse processes.

It is used as a strong base in organic chemistry. It is used to clean up sulfuric acid spills by making barium sulfate. It can also be used for removing ink marks from clothes.

Barium hydroxide is corrosive because it is basic. It is harmful if swallowed or inhaled. It is also toxic because of barium ions. It can be corrosive to metals.