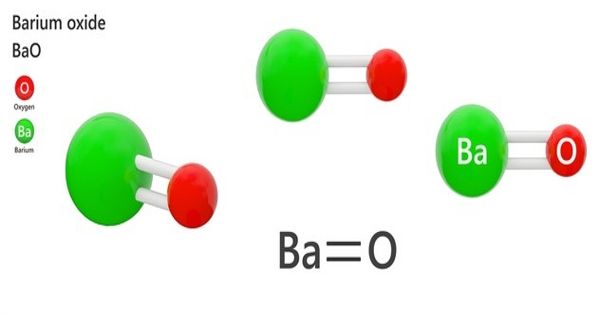 Barium oxide (BaO) is a white or yellowish-white poisonous heavy powder used esp as a dehydrating agent. It is a white hygroscopic non-flammable compound. It has a cubic structure and is used in cathode ray tubes, crown glass, and catalysts. It is widely used as a drying agent for solvents, in cathode ray tubes, catalysts, and crown glass. It is harmful to human skin and if swallowed in large quantity causes irritation. Excessive quantities of barium oxide may lead to death.

It is prepared by heating barium carbonate with coke, carbon black or tar or by thermal decomposition of barium nitrate. On reacting with water it generates heat that increases the fumes concentration in the air.

Barium oxide appears as a white to yellow powder. It is a white ionic crystal that has a non-flammable nature. It is a cubic structured compound that can be prepared by different methodologies, such as thermal decomposition of barium nitrate, and by heating barium carbonate with carbon black or tar.

Barium oxide is made by heating barium carbonate. It may also be prepared by thermal decomposition of barium nitrate. Likewise, it is often formed through the decomposition of other barium salts.

Barium oxide can be produced by thermally decomposing barium carbonate, BaCO3 or barium nitrate, Ba(NO3)2. The reactions are as follows:

Barium oxide is an irritant. It is a toxic and corrosive compound which is non-combustible and water sensitive. If it contacts the skin or the eyes or is inhaled it causes pain and redness. However, it is more dangerous when ingested. When this compound catches fire it liberates irritating, toxic, and corrosive gases. It can cause nausea and diarrhea, muscle paralysis, cardiac arrhythmia, and can cause death.