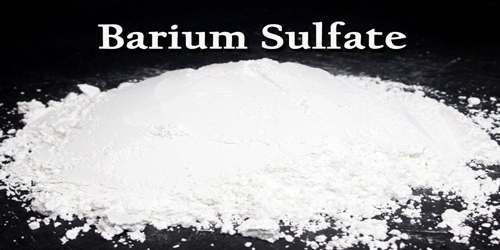 Barium sulfate is a fine white powder used in making textiles, rubber, and plastic. It is also used in diagnostic imaging of the digestive tract. It is a Radiographic Contrast Agent. The mechanism of action of barium sulfate is as an X-Ray Contrast Activity. Barium sulfate occurs in nature as the mineral barite. It is quite insoluble in water, and is used as a radiopaque agent to diagnose gastrointestinal medical conditions. Barium sulfate is non-combustible and non-toxic. Emits toxic sulfur oxides when heated to decomposition. Can act as an oxidizing agent, but usually does not. Reacts with reducing agents such as potassium, phosphorus or aluminum heating with aluminum can cause an explosion.

During the early part of the 20th century, during the Japanese colonization period, hokutolite was found to exist naturally in the Beitou hot-springs area near Taipei City, Taiwan. Hokutolite is a radioactive mineral composed mostly of PbSO4 and BaSO4, but also containing traces of U, Th and Ra. The Japanese harvested these elements for industrial uses, and also developed dozens of “therapeutic hot-spring baths” in the area.

Production and Properties of Barium Sulfate In the laboratory barium sulfate is generated by combining solutions of barium ions and sulfate salts. Because barium sulfate is the least toxic salt of barium due to its insolubility, wastes containing barium salts are sometimes treated with sodium sulfate to immobilize (detoxify) the barium. Barium sulfate is one of the most insoluble salts of sulfate. Its low solubility is exploited in qualitative inorganic analysis as a test for Ba2+ ions as well as for sulfate.

Barium sulfate has its chemical formula BaSO4. It is colorless or white orthorhombic crystals with relative molecular mass of 233.4, the relative density of 4.5 (15 ℃), the melting point of 1580 ℃, and the Refractive index of 1.637. Upon being heated to 1149 ℃, it will become monoclinic crystalline when the refractive index is 1.649. It is almost insoluble in water with the solubility being 0.00022 at 18 ℃ and 0.0041 at 100 ℃. It is slightly soluble in concentrated sulfuric acid and soluble in carbonate alkali metal solution in which it is converted to barium carbonate; it is insoluble in other kinds of acid or base. In nature, it is existed in the barite mineral form. Barium sulfate comes as a powder to be mixed with water, a suspension (liquid), a paste, and a tablet. The powder and water mixture and the suspension may be taken by mouth or may be given as an enema (liquid) that is instilled into the rectum, and the paste and tablet are taken by mouth. Barium sulfate is usually taken one or more times before an x-ray examination or CT scan. It is medically used as the agent (barium meal) for X-rays on the gut and stomach.

About 80% of the world’s barium sulphate production, mostly purified mineral, is consumed as a component of oil well drilling fluid. It increases the density of the fluid, increasing the hydrostatic pressure in the well and reducing the chance of a blowout. It can be used in analysis reagents, electronics, instrumentation, metallurgy and other industries. It can also be used as a white pigment and an administrated agent upon stomach X-ray angiography; it can also used as copper flux, drilling mud weight enlarging agent and the filling agent of rubber, paper, and plastic.

It may also be used as a size for modifying the colors in other pigments. It is also used to coat moulds used in metal casting so as to prevent bonding of the molten metal with the mould. Barium sulfate (the mineral barite, BaSO4) is important to the petroleum industry, for example, as drilling mud, a weighting agent in drilling new oil wells.