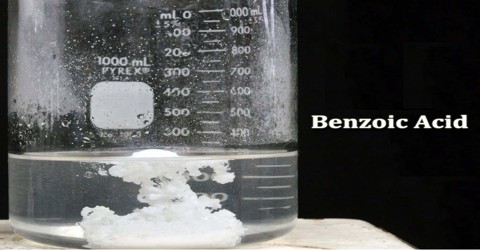 Benzoic acid is a white, crystalline acid used in preserving food, as a cosmetic, and in medicine. Benzoic acid consists of a benzene ring with a carboxyl group (COOH) attached. It occurs naturally in many plants and it serves as an intermediate in the biosynthesis of many secondary metabolites. Salts of benzoic acid are used as food preservatives and benzoic acid is an important precursor for the industrial synthesis of many other organic substances. Benzoic acid is a byproduct of phenylalanine metabolism in bacteria. It is also produced when gut bacteria process polyphenols, from ingested fruits or beverages. The formula for benzoic acid is: C7H6O2 or C6H5COOH. It was discovered in the sixteenth century. The dry distillation of gum benzoin was first described by Nostradamus (1556), and then by Alexius Pedemontanus (1560) and Blaise de Vigenère (1596). It is also one of the chemical compounds found in castoreum. This compound is gathered from the castor sacs of the North American beaver.

It is commercially manufactured by the chemical reaction of toluene (a hydrocarbon obtained from petroleum) with oxygen at temperatures around 200° C (about 400° F) in the presence of cobalt and manganese salts as catalysts. Pure benzoic acid melts at 122° C (252° F) and is very slightly soluble in water.

Structure and Production of Benzoic Acid

Benzoic acid is a solid that is crystalline in appearance, similar to white needles. A natural source of benzoic acid is gum benzoin, which comes from certain tree barks; however, benzoic acid can also be made by synthetic means. The chemical formula of benzoic acid is C7H6O2: it has seven carbon (C) atoms, six hydrogen (H) atoms and two oxygen (O) atoms. This chemical formula can also be written as C6H5COOH. The chemical structure of carboxylic acid is shown here. On the left, we see that all the carbon and hydrogen atoms on the benzene ring are drawn out, and on the right, we see the shorthand way to draw a benzene ring (in blue). The process for the production of benzoic acid by the liquid phase oxidation of toluene with an oxygen-containing gas in the presence of a heavy metal oxidation catalyst wherein benzoic acid and benzaledehyde are separated from a process residue that comprises benzoic acid, benzyl banzoate, reaction by-products having boiling points higher than the boiling point of benzaldehyde, and spent catalyst. Benzoic acid is very useful in the food industry, personal care industry and in medicine as well. It inhibits the growth of mold, yeast and some bacteria. It is either added directly or created from reactions with its sodium, potassium, or calcium salt. The mechanism starts with the absorption of benzoic acid into the cell.

Benzoic acid is an ingredient in cosmetic products, dyes and insect repellents. Because of benzoic acid’s anti-fungal nature, it acts as a preservative in these products by inhibiting the growth of mold, yeast, and bacteria. Benzoic acid is present in various products, including sauces, jams, jellies and candied fruits. In personal care products, it’s found in mouthwash, toothpaste, powder, lipstick and facial cleanser. It is a precursor to benzoyl chloride, C6H5C(O)Cl by treatment with thionyl chloride, phosgene or one of the chlorides of phosphorus. Benzoyl chloride is an important starting material for several benzoic acid derivates like benzyl benzoate, which is used in artificial flavours and insect repellents.