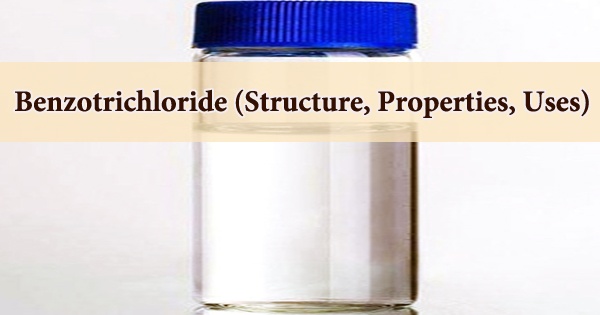 Benzotrichloride (BTC), also known as α,α,α-trichlorotoluene, phenyl chloroform, or (trichloromethyl)benzene, is an oily, colorless, chlorinated hydrocarbon with a pungent odor. Its hydrolyzed fumes (benzoic acid and hydrochloric acid) are very irritating to the skin and mucous membranes in humans when exposed to moisture. Denser than water and vapors are heavier than air. Inhalation or ingestion may be hazardous; burns skin, eyes, and mucous membranes. Insoluble in water; widely utilized as a chemical intermediate for a wide range of goods, including colors and antibacterial compounds.

When benzal chloride and benzotrichloride react with Et3Al etherate, they produce a combination of alkylation and reduction products. As defined in Section 302 of the U.S. Emergency Planning and Community Right-to-Know Act (42 U.S.C. 11002), benzotrichloride is classified as an extremely hazardous substance in the United States, and its use is subject to a list of reporting requirements for companies or institutions that synthesize, store, or use it in large quantities. It is reasonably anticipated to be a human carcinogen.

In the presence of moisture, benzotrichloride hydrolyzes. Water, lime, ammonia, strong alkalis, organic amines, chlorates, and acids all react with it. This material is poisonous if inhaled, causes serious eye damage, may cause cancer, causes skin irritation, is harmful if eaten, and may cause respiratory irritation, according to the European Union’s (EU) approved harmonised classification and labelling (CLP00). Gases that are flammable or dangerous can build up in tanks and hopper vehicles. Materials have the potential to ignite combustibles (wood, paper, oil, etc.). When Benzotrichloride combines with water or steam, it emits toxic and corrosive vapors.

The following are some instances of unrelated reactions involving benzotrichloride: When benzotrichloride reacts with resorcinol, 2,4-dihydroxybenzophenone is formed, which is utilized as a UV absorber in sunscreen

It can also be partially hydrolysed to benzoyl chloride:

Transformation into benzotrifluoride, a precursor to pesticides is also possible:

Based on significant evidence of carcinogenicity from research in experimental animals, benzotrichloride is reasonably expected to be a human carcinogen. The skin and mucous membranes are significantly irritated by acute (short-term) exposure to benzotrichloride fumes. Proliferative lesions of the respiratory tract have been found in mice and rats who were chronically (long-term) exposed by inhalation. The free radical chlorination of toluene, catalyzed by light or radical initiators such as dibenzoyl peroxide, produces benzotrichloride. The amount of human data on benzotrichloride’s carcinogenic consequences is insufficient. Female mice given orally, dermally, or by inhalation had an increased incidence of malignancies at several locations. The Environmental Protection Agency (EPA) has designated benzotrichloride as a Group B2 probable human carcinogen.

On heating, in contact with acids and/or water, benzotrichloride decomposes into poisonous and corrosive hydrogen chloride and benzoic acid. Strong oxidizers, iron and other metals, alkali and earth alkali metals, bases, and organic compounds react aggressively, resulting in fire and explosions. This benzoic acid is first converted to benzoyl-CoA, which is then converted to hippuric acid by substituting glycine for CoA. Its compounds are used to make antiseptics and antibacterial agents, as well as UV stabilizers in plastic.

The effects of repeated benzotrichloride exposure on inhalation, cutaneous exposure, and oral intake have all been studied. The researchers hypothesized that benzotrichloride is removed in the urine as hippuric acid, assuming that its metabolism is comparable to that of toluene. They next measured the background level of hippuric acid. Only a few incidences of lung cancer in humans have been connected to benzoyl chloride or benzotrichloride, while smoking may also have had a role.