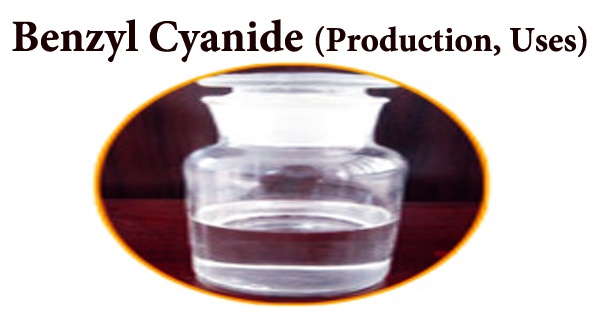 The organic compound benzyl cyanide (abbreviated BnCN) is a white, oily liquid with an aromatic odor. Its chemical formula is C6H5CH2CN. The reaction of benzyl chloride with potassium cyanide or sodium cyanide produces benzyl cyanide. Citrus fruits, papaya, cabbage, mushrooms, roasted onions, tomatoes, cocoa, tea, roasted peanuts, and cauliflower all contain nitrile, which is a natural component of plants and foods. It’s made by combining benzyl chloride and sodium cyanide in a Kolbe nitrile synthesis with oxidative decarboxylation of phenylalanine.

Arylation of silyl-substituted acetonitrile can also yield benzyl cyanides. The breakdown of benzylglucosinolate in plant material produces benzyl cyanide, at least in part. Tap water, river water, sewage, and cigarette smoke all contain benzyl nitrile. It goes through a number of nitrile-like reactions. It can either be hydrolyzed to produce phenylacetic acid or utilized in the Pinner reaction to produce phenylacetic acid esters. β-phenethylamine is produced by hydrogenation.

With sodium hypochlorite, benzeneacetonitrile can react violently. An “active methylene unit” is present in the chemical. When bromination occurs, PhCHBrCN is formed. If inhaled, eaten, or absorbed via the skin, benzyl cyanide is an extremely poisonous irritant that can be lethal. The chemical irritates the eyes, mucous membranes, and skin. Benzyl cyanide was applied to the skin of 27 human volunteers at a concentration of 2% in petroleum and found to be nonsensitizing. New carbon-carbon bonds are formed as a result of a number of base-induced processes.

Benzeneacetonitrile releases highly deadly cyanide and nitrogen oxide gases when heated to breakdown. Fungicides, perfumes (phenethyl alcohol), antibiotics, and other medications are all made with benzyl cyanide as a solvent and starting ingredient. It’s also utilized in soaps, detergents, creams, and lotions, and it’s used for scents and flavors. When BnCN is partially hydrolyzed, 2-phenylacetamide is formed, which is an anticonvulsant.

Organic synthesis, particularly the preparation of penicillin precursors, employs benzyl cyanide. Because it is a helpful precursor to a variety of drugs with recreational potential, it is highly regulated in many countries. However, in rats, cyanide was slowly freed from orally supplied benzyl cyanide and eliminated in the urine as cyanide and thiocyanate, with the proportion of the former increasing with the dose. When mice were primed with ethanol, the microsomal metabolism of benzyl cyanide and other nitriles was dramatically boosted, suggesting that the ethanol-inducible cytochrome P-450 may play a key role in the metabolism of these chemicals.

Benzyl cyanide, like other benzyl derivatives, is a skin and eye irritant. Any benzyl isocyanide impurity can be eliminated by shaking briskly with an equal volume of 50 percent H2SO4 at 60o, washing with saturated aqueous NaHCO3, then drying and fractionally distilling under reduced pressure with a half-saturated NaCl solution. Strong oxidizers; sodium hypochlorite, lithium aluminum hydride; violent reaction. Acetonitrile and propionitrile are water soluble, however nitriles with a molecular weight greater than propionitrile have low aqueous solubility. In addition, they are insoluble in aqueous acids.