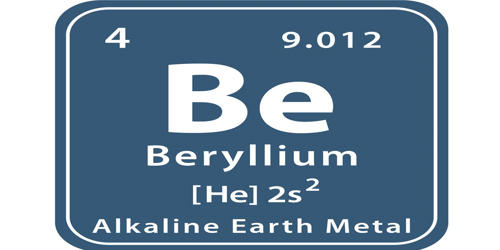 Beryllium is a chemical element with the symbol Be and atomic number 4. It is a silvery-white metal. It is relatively soft and has a low density. It is a relatively rare element in the universe, usually occurring as a product of the spallation of larger atomic nuclei that have collided with cosmic rays. It is a steel-gray metal that is quite brittle at room temperature, and its chemical properties somewhat resemble those of aluminum.

Beryllium belongs to the alkaline earth metal category, s-block, and period 2 of the periodic table. Within the cores of stars, beryllium is depleted as it is fused into heavier elements. It is a divalent element which occurs naturally only in combination with other elements in minerals. Beryllium was discovered in 1798 by the French chemist Louis Nicolas Vauquelin, who found it in the oxide form in beryl and a green-colored variety of beryl, emerald.

Beryllium is found in beryl and emerald, minerals that were known to the ancient Egyptians. In structural applications, the combination of high flexural rigidity, thermal stability, thermal conductivity, and low density (1.85 times that of water) make beryllium metal a desirable aerospace material for aircraft components, missiles, spacecraft, and satellites. It has one of the highest melting points of the light metals. Because of its low density and atomic mass, beryllium is relatively transparent to X-rays and other forms of ionizing radiation; therefore, it is the most common window material for X-ray equipment and components of particle detectors. The high thermal conductivities of beryllium and beryllium oxide have led to their use in thermal management applications. Beryllium does not form oxides until it reaches very high temperatures. It reacts with acids and with water to form hydrogen gas. It reacts briefly with oxygen in the air to form beryllium oxide (BeO).

Beryllium is used in gears and cogs particularly in the aviation industry. The commercial use of beryllium requires the use of appropriate dust control equipment and industrial controls at all times because of the toxicity of inhaled beryllium-containing dust that can cause a chronic life-threatening allergic disease in some people called berylliosis. It is used in alloys with copper or nickel to make gyroscopes, springs, electrical contacts, spot-welding electrodes, and non-sparking tools. Beryllium is also used in the field of X-ray detection diagnostic (it is transparent to X-rays) and in the making of various computer equipment.

It is a very toxic metal. It is especially dangerous in powder form. The effects of inhaling beryllium powder can be acute or chronic.