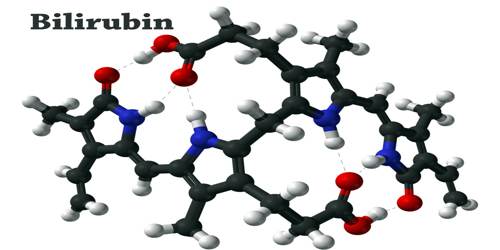 Bilirubin is excreted in bile and urine, and elevated levels may indicate certain diseases. It is responsible for the yellow color of bruises and the yellow discoloration in jaundice. Its subsequent breakdown products, such as stercobilin, cause the brown color of faeces. A different breakdown product, urobilin, is the main component of the straw-yellow color in urine.

Bilirubin is formed mainly by hemoglobin breakdown at the end of red cell life and eventually most of it leaves the body in the feces. Two types are in the blood. Water insoluble or unconjugated bilirubin refers to the pigment before it reaches the liver. In the liver it is converted to the water-soluble or conjugated bilirubin which is excreted into the bile. Blood tests for total bilirubin measure both unconjugated and conjugated bilirubin, and are performed to evaluate jaundice. Anemia, various liver diseases (including hepatitis), and impaired bile excretion. Bilirubin is a bile pigment that is a degradation product of heme. In particular, bilirubin is a yellow breakdown product of normal heme catabolism. Its levels are elevated in certain diseases and it is responsible for the yellow color of bruises. Bilirubin is an excretion product, and the body does not control levels. Bilirubin levels reflect the balance between production and excretion. Thus, there is no “normal” level of bilirubin. Bilirubin consists of an open chain of four pyrroles (tetrapyrrole); by contrast, the heme molecule is a closed ring of four pyrroles, called porphyrin.

Bilirubin in the bloodstream is usually in a free, or unconjugated, state; it is attached to albumin, a protein, as it is transported. Once in the liver it conjugates with glucuronic acid made from the sugar glucose. It is then concentrated to about 1,000 times the strength found in blood plasma. Much bilirubin leaves the liver and passes to the gallbladder, where it is further concentrated and mixed with the other constituents of bile. Bile stones can originate from bilirubin, and certain bacteria can infect the gallbladder and change the conjugated bilirubin back to free bilirubin and acid. The calcium from the freed bilirubin can settle out as pigment stones, which may eventually block the passageway (common bile duct) between the liver, gallbladder, and small intestine. When blockage occurs, conjugated bilirubin is absorbed into the bloodstream, and the skin becomes yellow in colour. In the liver, bilirubin is conjugated with glucuronic acid by the enzyme glucuronyltransferase, making it soluble in water: the conjugated version is the main form of bilirubin present in the “direct” bilirubin fraction. Much of it goes into the bile and thus out into the small intestine. Though most bile acid is reabsorbed in the terminal ileum to participate in enterohepatic circulation, conjugated bilirubin is not absorbed and instead passes into the colon.