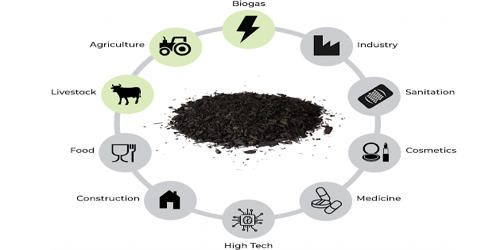 Biochar is a carbon-rich solid that is derived from biomass that is heated in a limited oxygen environment. It is charcoal used as a soil amendment for both carbon sequestration and soil health benefits. It is a type of fine-grained charcoal created by burning wood and agricultural byproducts slowly, at low temperatures, with a reduced oxygen supply. This is a charcoal produced from plant matter and stored in the soil as a means of removing carbon dioxide from the atmosphere. Biochar is a stable solid, rich in carbon, and can endure in soil for thousands of years. Like most charcoal, biochar is made from biomass via pyrolysis. It is under investigation as a viable approach for carbon sequestration, as it has the potential to help mitigate global warming and climate change.

Biochar, charcoal, and activated carbon are three forms of carbon that have a lot of overlap, with very similar composition and methods of production. Biochar may increase soil fertility of acidic soils (low pH soils), increase agricultural productivity, and provide protection against some foliar and soil-borne diseases. It is intended for agricultural use and is typically applied as a soil amendment, which is defined as any material that is added to soil to improve its physical properties, such as water and nutrient retention. Biochar reduces soil acidity decreasing liming needs but does not actually add nutrients. It made from manure is the exception; it retains a significant amount of nutrients from its source.

Biochar is a unique environmental approach to fertilizing. The physical and chemical properties of biochars as determined by feedstocks and technologies are crucial for the application of biochars in the industry and environment. Primary biochar benefits are its potential to combat climate change by removing harmful carbon from the atmosphere. Different characterization data are employed to biochars and determine their performances in specific use. For example, the guidelines published by the International Biochar Initiative provide standardized methods in evaluating the product quality of biochar for soil application. In fact, researchers believe that early residents of the Amazon rainforest enhanced soil productivity by using biochar, which they produced by burning agricultural waste slowly in trenches or pits.

The properties of biochar can be characterized in several respects, including the proximate and elemental composition, pH value, porosity, etc., which correlate with different biochar properties. The key chemical and physical properties are greatly affected by the type of feedstock being heated and the conditions of the pyrolysis process. The atomic ratios of biochar, including H/C and O/C, correlate with the biochar properties that are relevant to the organic content such as polarity and aromaticity. In the carbonization process, both the H/C and O/C ratio decreased due to the release of functional groups which contain hydrogen and oxygen.