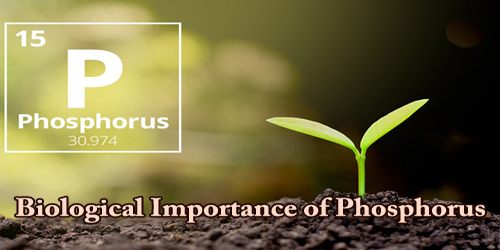 Phosphorus is essential to all living things. It forms the sugar-phosphate backbone of DNA and RNA. It is important for energy transfer in cells as part of ATP (adenosine triphosphate), and is found in many other biologically important molecules. We take in about 1 gram of phosphate a day, and store about 750 grams in our bodies since our bones and teeth are mainly calcium phosphate. Over-use of phosphates from fertilizers and detergents can cause them to pollute rivers and lakes causing algae to grow rapidly. The algae block out light stopping further photosynthesis. Oxygen dissolved in the water soon gets used up and the lake dies.

Phosphorus was first made by Hennig Brandt at Hamburg in 1669 when he evaporated urine and heated the residue until it was red hot, whereupon phosphorus vapor distilled which he collected by condensing it in water. Brandt kept his discovery secret, thinking he had discovered the Philosopher’s Stone that could turn base metals into gold. When he ran out of money, he sold phosphorus to Daniel Kraft who exhibited it around Europe including London where Robert Boyle was fascinated by it. He discovered how it was produced and investigated it systematically. (His assistant Ambrose Godfrey set up his own business making and selling phosphorus and became rich.)

When it was realized that bone was calcium phosphate and could be used to make phosphorus, and it became more widely available. Demand from match manufacturers in the 1800s ensured a ready market.

Phosphorus is the sixth most abundant element in the body. Our teeth and bones are made of calcium phosphate, which has phosphorus atoms. Phosphorus is part of deoxyribonucleic acid (DNA) and ribonucleic acid (RNA). It is also a component of adenosine triphosphate (ATP), the energy transfer molecule in cells. Phosphorous is even found in phospholipids that create the cell membrane.

Phosphorus plays a major role in the structural framework of DNA and RNA. Living cells use phosphate to transport cellular energy with adenosine triphosphate (ATP), necessary for every cellular process that uses energy. ATP is also important for phosphorylation, a key regulatory event in cells. Phospholipids are the main structural components of all cellular membranes. Calcium phosphate salts assist in stiffening bones. Biochemists commonly use the abbreviation “Pi” to refer to inorganic phosphate.

Every living cell is encased in a membrane that separates it from its surroundings. Cellular membranes are composed of a phospholipid matrix and proteins, typically in the form of a bilayer. Phospholipids are derived from glycerol with two of the glycerol hydroxyl (OH) protons replaced by fatty acids as an ester, and the third hydroxyl proton has been replaced with phosphate bonded to another alcohol.

Phosphorus is an essential macromineral for plants, which is studied extensively in edaphology to understand plant uptake from soil systems. Phosphorus is a limiting factor in many ecosystems; that is, the scarcity of phosphorus limits the rate of organism growth. An excess of phosphorus can also be problematic, especially in aquatic systems where eutrophication sometimes leads to algal blooms. The main food sources for phosphorus are the same as those containing protein, although proteins do not contain phosphorus. For example, milk, meat, and soya typically also have phosphorus. As a rule, if a diet has sufficient protein and calcium, the amount of phosphorus is probably sufficient.

White phosphorus is used as a deoxidizing agent in the preparation of steel and phosphor bronze. It is also used in rat poisons, to make smoke screens and provide illumination (by burning) for warfare, and as an incendiary. Red phosphorus is used in making matches.

The major use of phosphorus compounds is in fertilizers, especially in a mixture called superphosphate, obtained from phosphate minerals by sulfuric acid treatment; and in nitrophosphates. Phosphorus compounds are also used commercially in detergents, water softeners, pharmaceuticals, dentifrices, and in many other less important uses. Toxic nerve gases such as sarin contain phosphorus.