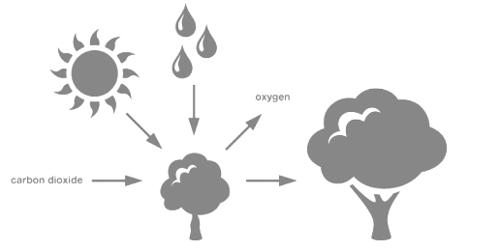 Biosequestration is the process of capturing and storing carbon in living organisms such as plants and algae. It is the capture and storage of the atmospheric greenhouse gas carbon dioxide by continual or enhanced biological processes. It is not a new process, but a process that was responsible for the formation of the extensive coal and oil deposits which are now being burned. It is the storage and removal of carbon from the atmosphere by conversion of carbon dioxide into biomass, generally by photosynthetic plants or bacteria.

This form of carbon sequestration occurs through increased rates of photosynthesis via land-use practices such as reforestation, sustainable forest management, and genetic engineering. Biological sequestration involves the net removal of greenhouse gases from the atmosphere by plants and micro-organisms and its storage in vegetative biomass and in soils. Methods and practices exist to enhance soil carbon sequestration in both sectors of agriculture and forestry. Additionally, in the context of industrial energy production, strategies such as Bio-energy with Carbon Capture and Storage to absorb carbon dioxide emissions from coal, petroleum, or natural gas-fired electricity generation can utilize an alternative of algal biosequestration. Biosequestration assists human beings to increase their collective and individual contributions to the essential resources of the biosphere.

The term ‘biosequestration’ was coined for one of the solutions to help balance greenhouse gas and carbon emissions as part of climate change policy. Biosequestration as a natural process has occurred in the past and was responsible for the formation of the extensive coal and oil deposits which are now being burned. The policy case for biosequestration overlaps with principles of ecology, sustainability, and sustainable development, as well as biosphere, biodiversity and ecosystem protection, environmental ethics, climate ethics, and natural conservation. It is a key policy concept in the climate change mitigation debate. Over Industrialisation created a havoc situation in the emission of Carbon-di-oxide. Carbon dioxide (CO2) has significantly contributed to the increase in the greenhouse effect. CO2 concentrations have increased over the last several decades mainly due to the increase of anthropogenic emissions. The major adverse effects are the high temperature of the gaseous stream and pH decrease of the culture medium due to the presence of NOx and SO2.

Biological sequestration involves the net removal of CO2 from the atmosphere by plants and micro-organisms and its storage in vegetative biomass and in soils. It does not generally refer to the sequestering of carbon dioxide in oceans or rock formations, depleted oil or gas reservoirs, deep saline aquifers, or deep coal seams or through the use of industrial chemical carbon dioxide scrubbing.