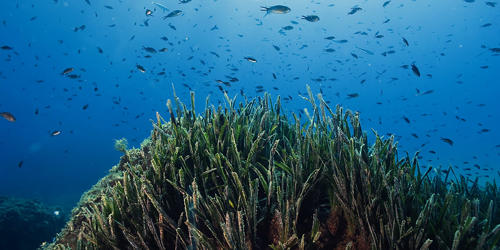 Blue carbon is the carbon stored in coastal and marine ecosystems. It is the term for carbon captured by the world’s ocean and coastal ecosystems. It refers to organic carbon that is captured and stored by the oceans and coastal ecosystems, particularly by vegetated coastal ecosystems: seagrass meadows, tidal marshes, and mangrove forests. It refers to carbon dioxide removed from the atmosphere by the world’s coastal ocean ecosystems, mostly mangroves, salt marshes, seagrasses, and potentially macroalgae, through plant growth and the accumulation and burial of organic matter in the soil. For example, over 95% of the carbon in seagrass meadows is stored in the soils.

Historically the ocean, atmosphere, soil, and terrestrial forest ecosystems have been the largest natural carbon (C) sinks. Healthy coastal habitat is not only important for seafood and recreation, it also plays an important role in reducing climate change. New research on the role of vegetated coastal ecosystems has highlighted their potential as highly efficient C sinks, and led to the scientific recognition of the term “Blue Carbon”. “Blue Carbon” designates carbon that is fixed via coastal ocean ecosystems, rather than traditional land ecosystems, like forests. Salt marshes, mangroves, and seagrass beds absorb large quantities of the greenhouse gas carbon dioxide from the atmosphere and store it, thus decreasing the effects of global warming. Although the ocean’s vegetated habitats cover less than 0.5% of the seabed, they are responsible for more than 50%, and potentially up to 70%, of all carbon storage in ocean sediments.

Mangroves, salt marshes, and seagrasses make up the majority of the ocean’s vegetated habitats but only equal 0.05% of the plant biomass on land. Mangroves are being lost at a rate of 2% per year. Experts estimate that carbon emissions from mangrove deforestation account for up to 10% of emissions from deforestation globally, despite covering just 0.7% of land coverage. Despite their small footprint, they can store a comparable amount of carbon per year and are highly efficient carbon sinks. The bigger picture of blue carbon is one of the coastal habitat conservation. When these systems are damaged, an enormous amount of carbon is emitted back into the atmosphere, where they can then contribute to climate change.

The bigger picture of blue carbon is one of the coastal habitat conservation. When these systems are damaged, an enormous amount of carbon is emitted back into the atmosphere, where they can then contribute to climate change. Seagrasses cover less than 0.2% of the ocean floor but store about 10% of the carbon buried in the oceans each year. Seagrasses, mangroves, and salt marshes can capture carbon dioxide (CO2) from the atmosphere by sequestering the C in their underlying sediments, in underground and below-ground biomass, and in dead biomass. Seagrasses, mangroves, and salt marshes along our coast “capture and hold” carbon, acting as something called a carbon sink.