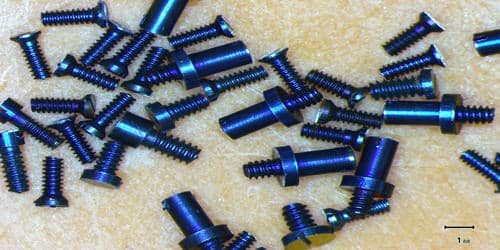 Bluing steel is the process of oxidizing the surface of the metal to protect it from rust. Bluing is a passivation process in which steel is partially protected against rust, and is named after the blue-black appearance of the resulting protective finish. Bluing or black oxidizing is a process of treating steel to create a thin protective shell around it. True gun bluing is an electrochemical conversion coating resulting from an oxidizing chemical reaction with iron on the surface selectively forming magnetite (Fe3O4), the black oxide of iron. It works by turning rust, into black iron oxide. The blue-black image of black iron oxide is what gives the name to this process. Bluing helps rust resistance compared to bare steel if you’re conscientious about keeping it oiled, but it really isn’t tremendously more resistant to rust than polished bare steel, and it’s nothing like the protection you get from paint or plating.

In comparison, rust, the red oxide of iron (Fe2O3), undergoes an extremely large volume change upon hydration; as a result, the oxide easily flakes off causing the typical reddish rusting away of iron. The most common form of bluing is the ‘hot method.’ This is not truly an oxidative process. It is the familiar finish found on almost all current firearms. “Cold”, “hot”, “rust blue” and “fume blue” are oxidizing processes simply referred to as bluing. ‘Cold bluing’ is the familiar stuff you dab on metal to color it. “Cold” bluing is generally a selenium dioxide based compound that colors steel black, or more often a very dark grey.

Bluing is most commonly used by gun manufacturers, gunsmiths, and gun owners to improve the cosmetic appearance and provide a measure of corrosion resistance to their firearms. Gun refinishing is one of the most gratifying phases of the gunsmithing work.

The most commonly used are cold bluing and hot bluing, but rust bluing was the standard for many years.

Bluing also helps to maintain the metal finish by resisting superficial scratching and also helps to reduce glare to the eyes of the shooter when looking down the barrel of the gun. There are several methods to blue gun barrels, such as hot bluing, cold bluing, rust bluing, niter bluing, charcoal bluing, and heat bluing.

Bluing, being a chemical conversion coating, is not as robust against wear and corrosion resistance as plated coatings, and is typically no thicker than 2.5 micrometers (0.0001 inches). For this reason, it is considered not to add any appreciable thickness to precisely-machined gun parts.