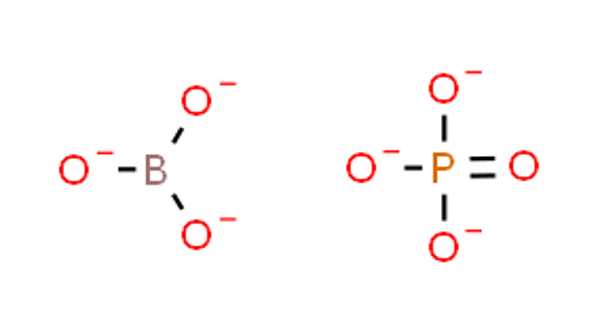 Organic esters of both borate and phosphate exist, for example, NADH-borate. Borates are boron-oxygen compounds that result in boron oxyanions. These can have trigonal or tetrahedral structures, or they can be chemical mixtures containing borate anions of either type. Boron is most commonly found in nature as borates, such as borate minerals and borosilicates.

Borates of marine origin have only been discovered in commercial quantities in Europe. Magnesium borates are found in Permian salt deposits. They were made in Germany as a byproduct of potash mining and in Kazakhstan’s Inder region.

Borates are made up of trigonal planar BO3 or tetrahedral BO4 structural units that are linked together by shared oxygen atoms and can have cyclic or linear structures.

The orthoborate(3–) ion, [BO3]3-, is known in the solid-state, for example, in Ca3(BO3)2, where it adopts a nearly trigonal planar structure. It is the structural analogue of the isoelectronic carbonate anion [CO3]2. The trigonal planar structure is suggested by simple bonding theories. The bonds are formed using sp2 hybrid orbitals on boron, according to valence bond theory.

Ingredients are heated together at atmospheric pressure in the high-temperature method. The products are anhydrous, and the production of borophosphates is possible.

In the boron flux method, ingredients such as ammonium phosphate and metal carbonate are dissolved in an excess of molten boric acid.

Borate phosphates are of research interest for their optical, electrooptical, or magnetic properties.