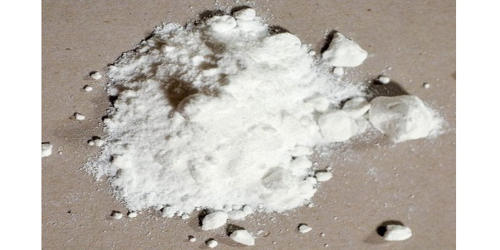 Boric acid (also known as hydrogen borate or orthoboric acid) is a weak, monobasic Lewis acid of boron. It naturally occurs in the environment. It is a weakly acidic hydrate of boric oxide with mild antiseptic, antifungal, and antiviral properties. It is a weak inorganic acid with antiseptic properties and is also called boracic acid or orthoboric acid. It is an odorless white solid. Melting point 171°C. Sinks and mixes with water. It can be found in soil, water, and plants. However, some of its behavior towards some chemical reactions suggest it to be tribasic acid in the Brønsted sense as well.

Boric acid is often used as an antiseptic, insecticide, flame retardant, neutron absorber, or precursor to other chemical compounds. It has the chemical formula H3BO3 (sometimes written B(OH)3), and exists in the form of colorless crystals or a white powder that dissolves in water. Boric acid dissolves in water and can move with water through the soil. When occurring as a mineral, it is called sassolite.

Boric acid, or sassolite, is found mainly in its free state in some volcanic districts, for example, in the Italian region of Tuscany, the Lipari Islands, and the US state of Nevada. In these volcanic settings, it issues, mixed with steam, from fissures in the ground. It is also found as a constituent of many naturally occurring minerals – borax, boracite, ulexite (boronatrocalcite), and colemanite. Boric acid and its salts are found in seawater. It is also found in plants, including almost all fruits. Boric acid does not emit vapors into the atmosphere. Particles that get into the air do not break down.

Boric acid was first prepared by Wilhelm Homberg (1652–1715) from borax, by the action of mineral acids, and was given the name sal sedativum Hombergi (“sedative salt of Homberg”). However, borates, including boric acid, have been used since the time of the ancient Greeks for cleaning, preserving food, and other activities.