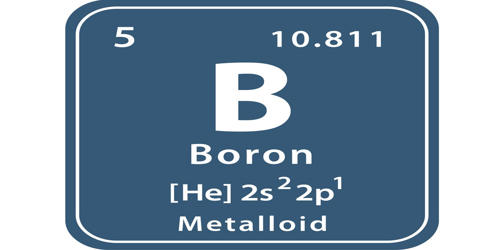 Boron (B) is a chemical element, semimetal of main Group 13 of the periodic table, essential to plant growth and of wide industrial application. It is a chemical element with the symbol B and atomic number 5. Produced entirely by cosmic ray spallation and supernovae and not by stellar nucleosynthesis, it is a low-abundance element in the Solar System and in the Earth’s crust. On Earth, boron is concentrated by the water-solubility of its more common naturally-occurring compounds, the borate minerals. Boron is concentrated on Earth by the water-solubility of its more common naturally occurring compounds, the borate minerals. It was first isolated (1808) by French chemists Joseph-Louis Gay-Lussac and Louis-Jacques Thenard and independently by British chemist Sir Humphry Davy by heating boron oxide (B2O3) with potassium metal.

The most important compounds of boron are boric (or boracic) acid, borax (sodium borate), and boric oxide. Boron combines with various metals to form a class of compounds called borides. The borides are usually harder, chemically less reactive, and electrically less resistive and have a higher melting point than the corresponding pure metallic elements. Elemental boron is a metalloid that is found in small amounts in meteoroids but chemically uncombined boron is not otherwise found naturally on Earth. Industrially, very pure boron is produced with difficulty because of refractory contamination by carbon or other elements. Several allotropes of boron exist: amorphous boron is a brown powder; crystalline boron is silvery to black, extremely hard (about 9.5 on the Mohs scale), and a poor electrical conductor at room temperature.

Boron is primarily used in chemical compounds. About half of all boron consumed globally is an additive in fiberglass for insulation and structural materials. Industrially, very pure boron can be produced, but this is difficult because boron tends to form refractory materials that contain small amounts of carbon or other elements. The next leading use is in polymers and ceramics in high-strength, lightweight structural and refractory materials. They are also used in fire retardants, leather tanning industries, cosmetics, photographic materials, soaps and cleaners, and high-energy fuel.

Borosilicate glass is desired for its greater strength and thermal shock resistance than ordinary soda-lime glass. Boron as sodium perborate is used as a bleach. Some pesticides used for cockroach control and some wood preservatives also contain borates. A small amount of boron is used as a dopant in semiconductors, and reagent intermediates in the synthesis of organic fine chemicals.

Boron is essential to life, although its exact physiological role in animals is not well-established. Small amounts of boron compounds play a role in strengthening the cell walls of all plants, thus making boron necessary in soils. Boric acid is an important compound used in textile products.